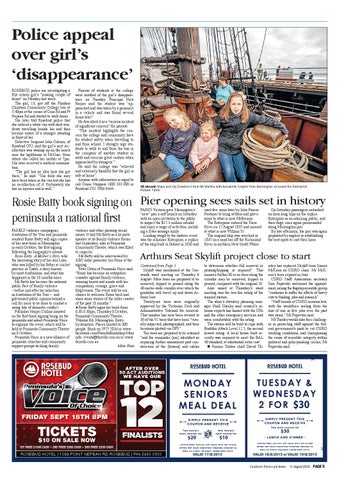 Police appeal over girl’s ‘disappearance’ ROSEBUD police are investigating a Rye school girl’s “missing couple of hours” on Monday last week. The girl, 13, got off the Flinders Christian Community College bus at 3.40pm at the corner of Cain Rd and Pt Nepean Rd and started to walk home. She later told Rosebud police that she noticed a white van with dark windows travelling beside her and then became aware of a stranger standing in front of her. Detective Sergeant John Coburn, of Rosebud CIU, said the girl’s next recollection was waking up on the beach near the lighthouse at McCrae, from where she called her mother at 7pm. She later received a medical examination. “The girl has no idea how she got there,” he said. “She feels she may have been taken in the van but she has no recollection of it. Fortunately she has no injuries and is well.”

Parents of students at the college were notified of the girl’s disappearance on Tuesday. Principal Nick Haines said the student was “approached and was taken by a person(s) in a vehicle and was found several hours later”. He described it as a “serious incident of significant concern” for parents. “This incident highlights the concern the college and community have for student safety when travelling to and from school. I strongly urge students to walk to and from the bus in the company of another student or adult and exercise great caution when approached by strangers.” He said the college was “relieved and extremely thankful that the girl is safe at home”. Anyone with information is urged to call Crime Stoppers 1800 333 000 or Rosebud CIU 5986 0444.

All aboard: Maya and Lily Crowhurst from Mt Martha with Annabelle Smythe from Mornington on board the Enterprize. Picture: Yanni

Rosie Batty book signing on Pier opening sees sails set in history peninsula a national first FAMILY violence campaigner, Australian of the Year and peninsula resident Rosie Batty will sign copies of her new book in Mornington in early October, the first signing following the biography’s release. Rosie Batty: A Mother’s Story tells the harrowing story of her son Luke, who was killed by his father at cricket practice in Tyabb, a story known by most Australians, and what has happened in the 18 months since. Ms Batty has become the national public face of family violence – before and after her selection as Australian of the Year – and galvanised public opinion behind a call for more to be done to combat a rising tide of domestic conflict. Publisher Harper Collins insisted on the first book signing being on the peninsula and asked Peninsula Voice to organise the event, which will be held at Peninsula Community Theatre on 8 October. Peninsula Voice is a new alliance of peninsula churches and community support groups tackling family

violence and other pressing social issues. It had Ms Batty as a keynote speaker at its family violence forum last September, also at Peninsula Community Theatre, which was filled to capacity. Ms Batty will be interviewed by ABC radio presenter Jon Faine at the signing. Peter Orton of Peninsula Voice said “Rosie has become an outspoken crusader against family violence, winning hearts and minds with her compassion, courage, grace and forgiveness. The event will be our chance to welcome Rosie back and share some stories of the roller coaster of the past 18 months.”  Rosie Batty signs her book from 6.30-8.30pm, Thursday 8 October, Peninsula Community Theatre, Wilsons Rd, Mornington. Entry by donation. Places limited to 400 people. Book on 5975 5034 or www. facebook.com/FarrellsBookshop More info: events@farrells.com.au or www. farrells.com.au Mike Hast

PARKS Victoria gave Mornington’s “new” pier a soft launch on Saturday with an open invitation to the public to inspect the $15.3 million rebuild and enjoy a range of activities, including a fr4ee sausage sizzle. Lending weigh to the historic event was the schooner Enterprize, a replica of the ship built in Hobart in 1830 and

used five years later by John Pascoe Fawkner to bring settlers and provisions to what is now Melbourne. The Enterprize entered the Yarra River on 15 August 1835 and moored at what is now William St. The original ship was wrecked in 1847 on a sand bar off the Richmond River in northern New South Wales.

On Saturday passengers embarked on hour-long trips on the replica Enterprize as an admiring public, and their dogs, once again promenaded along Mornington pier. By late afternoon, the pier was again populated by anglers re-establishing the best spots to cast their lines.

Arthurs Seat Skylift project close to start Continued from Page 1 Skylift was mentioned at the Seawinds ward meeting on Thursday 6 August. More trees are proposed to be removed, lopped or pruned along the 40-metre-wide corridor over which the gondolas will travel up and down Arthurs Seat. Twenty-six trees were originally approved by the Victorian Civil and Administrative Tribunal for removal. That number has now been revised to 39 of the 92 trees that have been “visually inspected, photographed, and their locations plotted via GPS”. Ten trees are proposed to be retained “and the remainder [are] identified as requiring further assessment post construction of the [towers] and cables

to determine whether full removal or pruning/lopping is required”. This means a further 80 or so trees along the corridor may be removed, lopped or pruned, compared with the original 26. Also raised at Thursday’s ward meeting was the low fire rating of the summit station. The shire’s statutory planning manager Niall Sheehy said council’s inhouse experts has liaised with the CFA and the other emergency services and were comfortable with the rating. The station will be built to cope with Bushfire Attack Level 12.5, the second lowest rating. A local house built recently was required to meet the BAL 40 standard, at substantial extra cost.  Former Telstra chief David Th-

odey has replaced Skylift boss Simon McKeon as CSIRO chair. Mr McKeon’s term expired in June. CSIRO Staff Association secretary Sam Popovski welcomed the appointment, saying the flagship scientific group “continues to suffer the effects of heavy cuts to funding, jobs and research”. “Staff morale at CSIRO remains low, with the workforce reeling from the loss of one in five jobs over the past two years,” Mr Popovski said. Mr Thodey would also face challenges in protecting staff against the federal government&#39;s push to cut CSIRO working conditions, and championing the cause of scientific integrity within political and policymaking circles, Mr Popovski said.