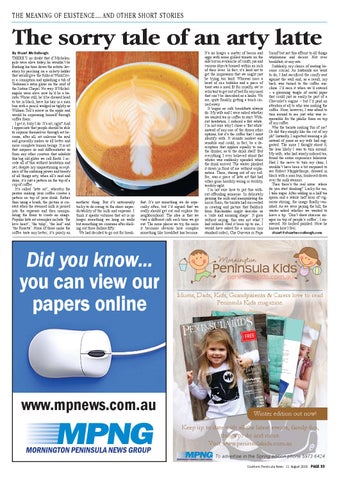 The sorry tale of an arty latte By Stuart McCullough THERE’S no doubt that if Michelangelo were alive today, he wouldn’t be flushing his time down the artistic lavatory by perching on a rickety ladder that would give the folks at WorkCover a conniption and splashing a tub of Taubman’s satin gloss on the roof of the Sistine Chapel. No way. If Michelangelo were alive now he’d be a barista. Worse still, he’d be dressed head to toe in black, have his hair in a man bun with a pencil wedged as tightly as William Tell’s arrow in the apple and would be expressing himself through coffee foam. I get it, truly I do. It’s art, right? And I appreciate that people should be able to express themselves through art because, after all, art enlivens the soul and generally makes us all better and more complete human beings. It is art that inspires us and differentiates us from any other creature that inhabits this big old globe we call Earth. I accede all of this without hesitation and yet, despite my unquestioning acceptance of the enduring power and beauty of all things arty, when all’s said and done, it’s just a pattern on the top of a cup of coffee. It’s called ‘latte art’, whereby the person making your coffee creates a pattern on top of your drink. Rather than using a brush, the picture is created when the steamed milk is poured into the espresso and then manipulating the foam to create an image. Popular latte art examples include ‘the love heart’, ‘the tulip’, ‘the leaf’ and ‘the Rosetta’. None of these make the coffee taste any better; it’s purely an

aesthetic thing. But it’s notoriously tricky to do owing to the sheer unpredictability of the milk and espresso. I think it speaks volumes that art is no longer something we hang on walls but something we consume after shelling out three dollars fifty. We had decided to go out for break-

fast. It’s not something we do especially often, but I’d argued that we really should get out and explore the neighbourhood. The idea is that we visit a different café each time we go out. The more places we try, the more it becomes obvious how complex something like breakfast has become.

It’s no longer a matter of bacon and eggs with some grilled tomato on the side but an avalanche of confit, jus and various objects braised within an inch of their lives. In fact, it’s hard not to get the impression that we might just be trying too hard. Whereas once a bowl of rice bubbles and a piece of toast was a meal fit for royalty, we’re reluctant to get out of bed for any meal that can’t be described as a haiku. We are, quite frankly, getting a touch carried away. It began as café breakfasts always do. My wife and I were asked whether we wanted tea or coffee to start. Without hesitation, I ordered a flat white. I’m not sure why I chose a ‘flat white’ instead of any one of the dozen other options, but it’s the coffee that I most identify with. It sounds modest and sensible and could, in fact, be a description that applies equally to me, the drinker, as to the drink itself. But everything I ever believed about flat whites was suddenly upended when the drink arrived. The waiter plonked it down in front of me without explanation. There, staring out of my coffee, was a piece of latte art that had either gone horribly wrong or terribly, terribly right. I’m not sure how to put this without offending someone. In delicately pouring the milk and manipulating the micro foam, the barista had succeeded in creating and picture that Baldrick from Blackadder might describe as a ‘rude and amusing shape’. It goes without saying: this was not what I had ordered. Had it been up to me, I would have asked for a unicorn (my standard order), Che Guevara or Papa

Smurf but not this affront to all things wholesome and decent. Not over breakfast, at any rate. Suddenly, my choice of seating became crucial. As husbands are want to do, I had sacrificed the comfy seat against the wall and, as a result, my back was turned to the coffee machine. I’d seen it when we’d entered – a gleaming tangle of metal pipes that could just as easily be part of a Chevrolet’s engine – but I’d paid no attention at all to who was making the coffee. Now, however, I was afraid to turn around to see just who was responsible for the phallic foam on top of my coffee. Was the barista making fun of me? Or did they simply like the cut of my jib? Instantly, I regretted wearing a jib instead of jeans as my wife had suggested. The more I thought about it, the less likely I was to turn around. My wife, who had wisely ordered tea, found the entire experience hilarious. Had I the nerve to turn my chair, I wouldn’t have been a bit surprised to see Robert Mapplethorpe, dressed in black with a man bun, hunkered down over the milk steamer. Then there’s the real issue: where do you start drinking? Lucky for me, I take sugar. After adding in a half tea spoon and a whole half hour of vigorous stirring, the image finally vanished. As we were paying the bill, the waiter asked whether we wanted to leave a tip. ‘Don’t draw obscene images on top of people’s coffee’, I answered. He looked puzzled. Now he knows how I feel. stuart@stuartmccullough.com

Peta is a blog ww mum of three bo a partic w.trtlmt.com.a ys. Peta LO VES ular foo u d style as well as The cooking! If she isn and be ’t runnin lieves in 4 Blades Ma g ma gazin everythin g in mo e which she dly after the kid deration is . Excep co owner of. dies she is coo Peta lov t lollies king for . 600k g of loll es cooking thin her Cooking g an ies in on and gs from d The e sitting scratcch, omix ix h, es rmom is perfe n’t’t follow ctly acc doesn ow cep eptab ta le!

UNDER THE SEA PARTY

Keep up to date with all the latest events, family fun, things to do and more. Visit www.peninsulakids.com.au To advertise in the Spring edition phone 5973 6424 Southern Peninsula News 11 August 2015