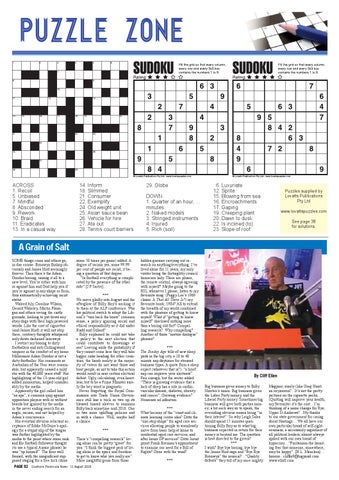 A Grain of Salt SOME things come and others go, in due course. Bronwyn Bishop obviously and James Hird seemingly forever. Then there’s the Adam Goodes booing, raising it all to a new level. You’re either with him or against him and God help you if you’re against in any shape or form, thus automatically achieving racist status. Waleed Aly, Caroline Wilson, Gerard Wakeley, Martin Flanagan and others roving the castle grounds, looking to put down any stray dogs with their high-powered words. Like the cost of cigarettes (and James Hird) it will not stop there; contrary thoughts whispered only down darkened laneways. I restrict my booing to dirty footballers and anti-Collingwood umpires in the comfort of my home. Millionaire Adam Goodes is not a dirty footballer. His comments as Australian of the Year were reasonable, but apparently caused a mild stir with the 40,000 years stuff. His highlighting of the 13-year-old girl added momentum, helped considerably by the media. Apparently the girl called him “an ape”, a common quip against opposition players with or without beards but ignored by the media in the never ending search for an angle, racism, and not helped by Adam’s concurrence. His eventual obvious reluctant acceptance of Eddie McGuire’s apology for a stupid slip of the tongue was further highlighted by the media to the point where some rank and file football followers thought (to use a typical Aussie phrase) he was “up himself”. The fires well fanned, with the insignificant supposed staging for a free kick (done

some 50 times per game) added. A degree of racism yes, some 99.99 per cent of people are racist, it being a question of that degree. “In football everything is complicated by the presence of the other side” [J P Sartre]. *** We move gladly into August and the afterglow of Billy Boy’s socking it to them at the ALP conference. Was his political switch to adopt the Liberal’s “turn back the boats” common sense, a policy ignoring social and ethical responsibility as it did under Rudd and Gillard? Billy explained he could not take a policy to the next election that could contribute to drownings at sea? Leaving aside the probability if they cannot come here they will take bigger risks heading for other countries, the harsh reality is the majority of voters do not want those sad boat people, so not to take this action would result in near certain electoral defeat. Ugly, calculating, even heartless, but to be a Prime Minister surely the key word is pragmatic. Never forgetting the Royal Commission into Trade Union Governance still has a trick or two up its blessed biased sleeves to summon Billy back sometime mid-2016. One or two more uplifting policies and in with a chance. Well, maybe half a chance. *** There’s “compelling research” living alone can be pretty “great” for you. “I think the biggest perk of living alone is the space and freedom to get to know who you really are”. More insightful gems from those

hidden gnomes carrying out research on anything/everything. I’ve lived alone for 11 years, my only visitor being the fortnightly council homecare lady. There are pluses; the remote control, always agreeing with myself? Maybe going to the RSL whenever I please, listen to my favourite song. (Peggy Lee’s 1969 classic Is That All There Is?) my favourite book; 1984? All to extend the breadth of my world combined with the pleasure of getting to know myself. What if “getting to know myself” disclosed nothing more than a boring old fart? Compelling research? Why compelling? Another of those “mature dialogue” phrases? *** The Sunday Age tells of new sleep pods in the big city, a 20 to 40 minute nap daytimes for stressed business types. A quote from a sleep expert (whatever that is?): “a brief nap can improve your alertness”. Fair enough, but the writer added “There is growing evidence that a lack of sleep has a role in cardiovascular disease, diabetes, obesity and cancer”. Growing evidence? Nonsense ad infinitum. *** What became of the “coast and climate learning centre idea? Ditto the “one-stop shops” for aged care services allowing people to seamlessly move from basic help at home to residential aged care services, and after hours GP services? Ditto Jesuit priest Frank Brennan’s appointment to examine our need for a Bill of Rights? Gone with the wind? ***

By Cliff Ellen Big business gives money to Billy Shorten’s union. Big business gives the Labor Party money, and the Liberal Party money. Sometimes big business will give both parties money; a bit each way so to speak, the overriding obvious reason being “in their interest”. So why Leigh Sales should spend 15 minutes questioning Billy Boy as to what big business expected in return for their money is beyond me. The question is best directed to the givers? *** I wish? Bye bye booing, bye bye the James Hird saga and “Bye Bye Bronwyn” the musical?...“Quality defeats” they tell of my once mighty

Magpies; surely (like Greg Hunt) an oxymoron?...It’s not the pretty pictures on the cigarette packs, (Quitting will improve your health; my favourite) it’s the cost... I’m thinking of a name change for Rye; Upper St Andrews?...My thanks to our state government for caring about Hastings.... We all have our own particular brand of self-righteousness, a necessarily ingredient of all political leaders, almost always spiked with our own brand of hypocrisy....“Puritanism-the haunting fear that someone, somewhere, may be happy”. [H.L. Mencken]... hooroo...cliffie9@bigpond.com www.ello8.com