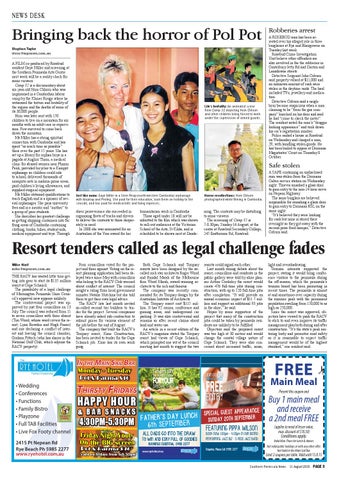 Bringing back the horror of Pol Pot Stephen Taylor steve@mpnews.com.au A FILM co-produced by Rosebud resident Gaye Miller and screening at the Southern Peninsula Arts Centre next week will be a reality check for some viewers. Camp 32 is a documentary about six-year-old Hom Chhorn who was imprisoned in a Cambodian labour camp by the Khmer Rouge where he witnessed the torture and brutality of the regime and the deaths of some of its 30,000 people. Hom was later sent with 150 children to live on a mountain for six months with no adult care or supervision. Few survived to come back down the mountain. Ms Miller has a strong spiritual connection with Cambodia and has spent “as much time as possible” there over the past 15 years. She has set up a library for orphan boys in a pagoda at Angkor Thom, a medical clinic for abused women near Phnom Penh, provided bicycles to a Kampot orphanage so children could ride to school, delivered thousands of mosquito nets in malaria-prone areas, paid children’s living allowances, and supplied surgical equipment. Ms Miller obtained qualifications to teach English and is a sponsor of several orphanages. She pays university fees and is a mentor and “mother” to a group of poor students. She describes her greatest challenge as getting shipping containers into far flung areas of Cambodia containing clothing, books, bikes, student aids, medical equipment and toys. Through

Life’s brutality: An animated scene from Camp 32 depicting Hom Chhom and other children being forced to work under the supervision of armed guards.

Robberies arrest A ROSEBUD man has been arrested over his alleged role in three burglaries at Rye and Blairgowrie on Tuesday last week. Rosebud Crime Investigation Unit believe other offenders are also involved in the the robberies in Canterbury Jetty Rd and Caxton and Lansdowne streets. Detective Sergeant John Coburn said property valued at $11,000 and an unknown amount of cash were stolen in the daytime raids. The haul included TVs, jewellery and medication. Detective Coburn said a neighbour became suspicious when a man claiming to be “from the gas company” knocked on his door and said he had “come to check the meter”. The resident noted the man’s “druggie looking appearance” and took down his car’s registration number. Police raided a house in Rosebud on Wednesday and charged a man, 29, with handling stolen goods. He has been bailed to appear at Dromana Magistrates’ Court on Thursday 8 October.

Just like mum: Gaye Miller in a Siem Reap (north-western Cambodia) orphanage with Mophay and Proling. She paid for their education, took them on holiday to the seaside, and has paid for medical bills and living expenses.

sheer perseverance she succeeded in organising fleets of trucks and drivers to deliver the contents to those desperately in need. In 2008 she was nominated for an Australian of the Year award for her

humanitarian work in Cambodia. Those aged under 18 will not be admitted to the film which was shown to sell-out audiences at the Victorian School of the Arts, St Kilda, and is scheduled to be shown next at Dande-

nong. The contents may be disturbing to some viewers. The screening of Camp 32 is 7-8.30pm, Sunday 16 August, at the centre at Rosebud Secondary College, 245 Eastbourne Rd, Rosebud.

A SAFE containing an undisclosed sum was stolen from the Dromana Caltex service station on Wednesday night. Thieves smashed a glass door to gain entry to the non-24 hour servo on Nepean Highway. The same burglars are believed responsible for smashing a glass door to gain entry to Dromana RSL on the same night. “It’s believed they were looking for cash but none is stored there overnight so they got away with the second prize food hamper,” Detective Coburn said.

Resort tenders called as legal challenge fades Mike Hast mike@mpnews.com.au THE RACV has wasted little time getting into gear to start its $135 million resort at Cape Schanck. The possibility of a legal challenge of Mornington Peninsula Shire Council’s approval now appears unlikely. The controversial project was approved by just four councillors on 13 July. The council was reduced from 11 to seven councillors with three absent (Tim Wood, whose ward covers the resort, Lynn Bowden and Hugh Fraser) and one declaring a conflict of interest and leaving the council chamber, Graham Pittock (who has shares in the National Golf Club, which adjoins the RACV property).

Four councillors voted for the project and three against. Voting on the resort planning application had been delayed twice since May with councillors who belong to the RACV Club worried about conflict of interest. The council sought a ruling from local government minister Natalie Hutchins but she told them to get their own legal advice. The RACV late last month invited so-called second tier builders to tender for the project. Several companies have already asked sub-contractors to submit prices for various element of the job before the end of August. The company that built the RACV’s Torquay resort, Kane Construction, has been invited to tender for the Cape Schanck job. Kane has its own work gang.

resorts could signal each other. Last month during debate about the resort, councillors and residents in the public gallery were told by shire planner Arthur Cooksley the resort would create 476 full-time jobs during construction, with up to 120 full-time jobs after completion. “It will provide an annual economic impact of $11.7 million and support an additional 93 jobs in the shire,” he said. Hopes by some supporters of the project that many of the construction jobs could be taken by peninsula residents are unlikely to be fulfilled. Objectors said the proposed resort was too high at 30 metres and would change the coastal village nature of Cape Schanck. They were also concerned about increased traffic, noise,

light and overshadowing. Tourism interests supported the project, stating it would bring conference visitors to the peninsula during the off-season, which the peninsula’s tourism board has been promoting in recent times. The peninsula is almost at and sometimes over capacity during the summer peak with the permanent population swelling from 150,000 to as high as 250,000. Since the resort was approved, objectors have vowed to push the RACV to stick to and even improve its traffic management plan both during and after construction. “It’s the state’s peak motoring body and promotes road safety so it is reasonable to expect traffic management would be of the highest standard,” one resident said.

IN THE MAIN SAIL BAR

Both Cape Schanck and Torquay resorts have been designed by the socalled rock star architects Roger Wood and Randal Marsh of the Melbourne firm Wood Marsh, award-winning architects to the rich and famous. The company was recently commended for its Torquay design by the Australian Institute of Architects. The Torquay resort cost $115 million. It has 92 rooms, conference and gaming areas, and underground car parking. It was also controversial and remains so after recent claims about land and water use. An article in a recent edition of the RACV’s magazine stated the Torquay resort had views of Cape Schanck, which prompted one wit at the council meeting last month to suggest the two

Main Meal Present this coupon and

Valid Mon-Thurs for lunch & dinner. Not valid public holidays or with any other offer. Not Valid in the Main Sail Bar.