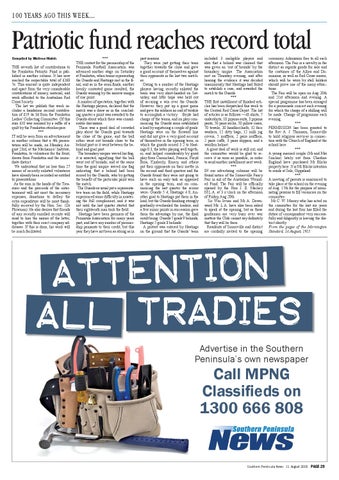 Patriotic fund reaches record total Compiled by Melissa Walsh THE seventh list of contributions to the Frankston Patriotic Fund is published in another column. It has now reached the respectable total of £268 7s. This amount is quite independent and apart from the very considerable contributions of money, material, and work afforded to the Australian Red Cross Society. The list we publish this week includes a handsome second contribution of £19 4s 3d from the Frankston Ladies’ Collecting Committee. Of this sum £10 was realized by a raffle of a quilt by the Frankston storekeepers. *** IT will be seen from an advertisement in another column that a 4th presentation will be made, on Monday, August 23rd, at the Mechanics’ Institute, Frankston, to volunteers for the front, drawn from Frankston and the immediate district. We understand that no less than 27 names of recently enlisted volunteers have already been recorded as entitled to presentations. As the sum in the hands of the Treasurer and the proceeds of the entertainment will not meet the necessary expenses, donations to defray the extra expenditure will be most thankfully received by the Hon. Sec. (Dr Plowman). He also desires that friends of any recently enrolled recruits will send to him the names of the latter, together with their exact company addresses. If this is done, his work will be much facilitated.

*** THE contest for the premiership of the Peninsula Football Association was advanced another stage on Saturday at Frankston, when teams representing the Guards and Hastings met in the final, and as in the semi-finals, another keenly contested game resulted, the Guards winning by the narrow margin of one point. A number of spectators, together with the Hastings players, declared that the match was a draw as in the concluding quarter a point was awarded to the Guards about which there was considerable discussion. There was a good deal of crowded play about the Guards goal towards the close of the game, and the ball either went out bounds close to the behind post or it went between the behind and goal post. The boundary umpire waved his flag, it is asserted, signifying that the ball went out of bounds, and at the same time the goal umpire waved one flag indicating that a behind had been scored by the Guards, who by getting the benefit of the particular point won the match. The Guards as usual put a representative team on the field, while Hastings experienced some difficulty in mustering the full complement, and it was not until the last quarter started that their eighteenth man took the field. Hastings have been premiers of the Peninsula Association for many years past, and have any number of premiership pennants to their credit, but this year they have not been as strong as in

past seasons. They were just getting their team together towards the close and gave a good account of themselves against their opponents in the last two matches. Owing to a number of the Hastings players having recently enlisted the team was very short-handed on Saturday, and little hope was held out of securing a win over the Guards. However they put up a great game and gave the soldiers no end of trouble to accomplish a victory. Boyle had charge of the teams, and on play commencing the Guards soon established a lead by registering a couple of goals. Hastings were on the forward line and did not give a very good account of themselves in the opening term; in which the guards scored 3 2 to Hastings 0 3, the latter playing well together, and helped considerably by good play from Carmichael, Francis, Floyd Bros, Kimberly, Emery, and others put their opponents on their mettle in the second and third quarters and the Guards found they were not going to have such an easy task as appeared in the opening term, and on commencing the last quarter the scores were- Guards 5 4; Hastings 4 8; Another goal to Hastings put them in the lead, but the Guards finishing strongly gradually overhauled the leaders, and a few minor points in succession gave them the advantage by one, the final result being: Guards 5 goals 9 behinds, Hastings 5 goals 8 behinds. A protest was entered by Hastings on the ground that the Guards’ team

included 3 ineligible players and also that a behind was claimed that was given an ‘out of bounds’ by the boundary umpire. The Association met on Thursday evening, and after hearing the evidence it was decided unanimously that Hastings had failed to establish a case, and awarded the match to the Guards. *** THE first installment of finished articles has been despatched this week to the Central Red Cross Depot. The list of articles is as follows:—43 shirts, 7 undershirts, 10 pyjama suits, 3 pyjama pants, 50 pairs socks, 50 pillow cases, 70 towels, 20 handkerchiefs, 32 face washers, 12 ditty bags, 12 milk jug covers, 5 mufflers, 2 pairs mufflers, 2 pairs cuffs, 3 pairs slippers, and a woollen helmet. A great deal of work is still out, and the committee would be glad to receive it as soon as possible, in order to send another installment next week. *** IN our advertising columns will be found notice of the Somerville Fancy Fair in aid of the Australian Wounded Fund. The Fair will be officially opened by the Hon J. E. Mackey M.L.A. at 3 o’clock on the afternoon of Friday, Aug 20th. Sir Wm Irvine and Mr A. Downward Ms. L A. have also been asked to speak at the opening, but as these gentlemen are very busy over war matters the Club cannot say definitely that they will be there. Residents of Somerville and district are cordially invited to the opening

ceremony. Admission free to all each afternoon. The Fair is a novelty in the district as regards goods for sale and the costumes of the Allies and Dominions, as well as Red Cross nurses, which will be worn by stall holders should prove one of the many attractions. The Fair will be open on Aug 20th and 21st afternoon and evening. A special programme has been arranged for a promenade concert each evening for which the charge of a shilling will be made. Change of programme each evening. *** PERMISSION has been granted to the Rev A. J. Thomson, Somerville to hold religious services in connection with the Church of England at the school here. *** A young married couple (Mr and Mrs Sinclair) lately out from Cheshire England have purchased Mr Blicks property here. It is Mr Blicks intention to reside at Sale, Gippsland. *** A meeting of parents is announced to take place at the school on the evening of Aug. 17th for the purpose of nominating persons to fill vacancies on the committee. Mr C. W. Murray who has acted on the committee for the last six years and during the last four has filled the duties of correspondent very successfully and diligently is leaving the district shortly. From the pages of the Mornington Standard, 14 August, 1915

Advertise in the Southern Peninsula’s own newspaper