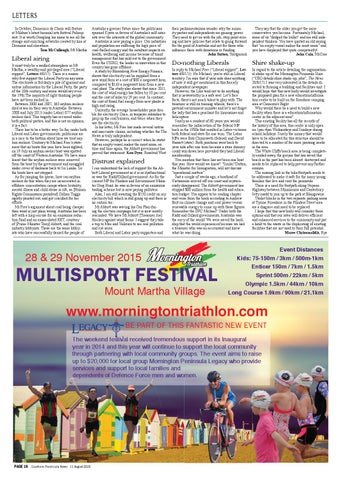 LETTERS In October, Domenico de Clario will feature at Mildura’s latest biennial arts festival Palimpsest. It is worth Googling his name to see all the strange and enriching artworks created by him at Dromana and elsewhere. Tom McCullough, Mt Martha

Liberal airing It must truly be a rarified atmosphere in Mt Martha, a wealthy and privileged area (“Liberal support”, Letters 4/8/15). There is a reason why few support the Liberal Party on any issue. The electorate is fed daily a pile of ignorant and untrue information by the Liberal Party, the party of the 20th century, and some would say even the 19th.The majority of right thinking people have not been sucked in. Between 2000 and 2007, 363 asylum seekers died at sea on their way to Australia. Between 2008 and July 2013 (under Labor) 877 asylum seekers died. This tragedy has occurred under both political parties, and this is not an opinion, it is a fact. There has to be a better way. So far, under both Liberal and Labor governments, politicians are in a race to the bottom about how we treat asylum seekers. Contrary to Michael Free’s statement that no boats this year have been sighted, on 19 July an asylum seeker boat was spotted off the coast of Western Australia. We have since learnt that the asylum seekers were removed from the boat by the government and smuggled under cover of darkness back to Sri Lanka. So the boats have not stopped. As for jumping the queue, how can asylum seekers do this when they are incarcerated in offshore concentration camps where brutality, mental illness and child abuse is rife, as [Human Rights Commission president] Gillian Triggs rightly pointed out, and got crucified for her efforts. Mr Free’s argument about coal being cheaper than wind is just plain wrong. Australia has been left with a limp excuse for an emissions reduction fund and an emasculated RET, courtesy of [Prime Minister Tony] Abbott, and the coal industry lobbyists. These are the same lobbyists who have successfully denied the people of

Australia a greener future since the politicians spurned Kyoto in favour of Australia's self-interests over the interests of the global community. Australia is now paying a price. Our industries and population are suffering the high price of coal-fuelled energy and the resultant impacts on health, wellbeing and income because of timid management that has sold out to the government. Even the CSIRO, the leader in innovation in this country has gone offshore. A study by Bloomberg New Energy Finance, shows that electricity can be supplied from a new wind farm at a cost of $80 a megawatt hour, compared to $143 a megawatt hour from a new coal plant. The study also shows that since 2011, the cost of wind energy has fallen by 10 per cent and the cost of solar by 29 per cent. In contrast, the cost of fossil fuel energy from new plants is high and rising. Currently, the average householder pays double for electricity. Once, in taxpayer subsidies to prop up the coal burners, and twice when they use the electricity. In his letter, Mr Free has made several untrue and inaccurate claims, including whether the The News is truly independent. However, perhaps he is correct when he states that an empty vessel makes the most noise, as time and time again, the Abbott government has proved that statement. Ken Dyer, Rosebud West

Distrust explained I can understand the lack of support for the Abbott Liberal government as it is as dysfunctional as was the Rudd/Gillard government. As for the current MP for Flinders and Environment Minister Greg Hunt, he was in favour of an emissions trading scheme but is now paying polluters. Also, I am still awaiting the $550 credit on my electricity bill which is still going up and there is no carbon tax. Mr Abbott was waving his Our Plan during the election campaign but it is now mostly rescinded. We have Mr Abbott [Treasurer Joe] Hockey against wind farms. I suggest they take a trip to Moe and Yallourn to see real pollution and eye sores. Both Liberal and Labor party supporters and

their parliamentarians wonder why the minority parties and independents are gaining power. They need to get on with the job, stop point scoring and have policies that relate to going forward for the good of Australia and not for those who influence them with donations or funding. John Sutton, Tootgarook

They say that the older you get the more conservative you become. Fortunately Michael, some of us "dodged the bullet" and are still independent thinkers. You have quoted an old saying that "an empty vessel makes the most noise" and you have displayed that quite competently! John Cain, McCrae

In reply to Michael Free (“Liberal support”, Letters 4/8/15)): No Michael, you're still in Liberal territory. I'm sure that if your side does anything of note it will get mentioned in this fiercely independent newspaper. However, the Libs tend not to do anything that is newsworthy in a safe seat. Let’s face facts, there's not much talent to play with. The treasurer is still on training wheels, there's a pretend environment minister and let’s not forget the lady that has a penchant for limousines and helicopters. Surely as a resident of 60 years you would remember the indiscretion of the federal MP back in the 1980s that resulted in Labor victories both federal and state for one term. The Labor MPs were Bob Chynoweth (federal) and David Hassett (state). Both positions went back to your side after one term because a store dummy could win down here provided they had Liberal membership. You mention that there has not been one boat this year. How would we know? "Smiler"Dutton, the Minister for Immigration, will not discuss "operational matters”. Just a couple of weeks ago, a boatload of Vietnamese arrived off our coast and mysteriously disappeared. The Abbott government has stripped $80 million from the health and education budget. You appear to be reading chapter and verse from the book according to Andrew Bolt on climate change and coal power versus renewable energy to come up with these figures. Remember the GFC Michael? Under both the Rudd and Gillard governments, Australia was the envy of the world. We were saved the hardship that the world experienced because we had a treasurer who was an accountant and knew what he was doing.

In regard to the article detailing the organisational shake-up of the Mornington Peninsula Shire (“CEO details shire shake-up, jobs”, The News 28/8/15) I was very interested in the details directed to forming a building and facilities unit. I would hope that this new body would investigate the proposed plan for a new education/information centre to be built on the foreshore camping area at Cameron's Bight. Why would there be a need to build a new facility when there is a education/information centre in the adjacent area? This existing facility has all the records of the history of this area, this centre is only open on 1pm-4pm Wednesdays and Sundays during school holidays. Surely the money that would have to be allocated for this structure should be directed to a number of far more pressing needs in the area. The White Cliffs beach area is being completely eroded away, the groyne that has saved this beach in the past has been almost destroyed and needs to be replaced to help prevent any further erosion. The missing link in the bike/footpath needs to be addressed to make it safe for the many young families that live and visit the peninsula. There is a need for footpath along Nepean Highway between Minnimurra and Canterbury Jetty roadd to join up to the path at Blairgowrie. Ttoilet blocks in the two separate parking areas at Tyrone Foreshore in the Flinders Street area are a disgrace and need to be replaced. I hope that this new body will consider these options and that our rates will deliver efficient and enhanced services to the community and put a hault to the waste in the duplicating of existing facilities that are not used to their full potential . Maree Chrisomalidis, Rye

www.morningtontriathlon.com BE PART OF THIS FANTASTIC NEW EVENT Th weekend The k d festival f ti received tremendous support in its Inaugural year in 2014 and this year will continue to support the local community through partnering with local community groups. The event aims to raise up to $20,000 for local group Mornington Peninsula Legacy who provide services and support to local families and men. dependents of Defence Force men and women.