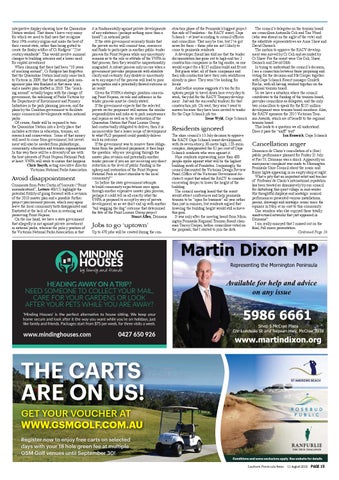 interpretive display showing how the Quarantine Station worked. That doesnâ&#x20AC;&#x2122;t leave very many for which we need to find uses that recognise their 19th century origins and make the best of their current state, rather than being gutted to create the flashy artifice of Cr Rodgersâ&#x20AC;&#x2122; â&#x20AC;&#x153;21st century standardsâ&#x20AC;?. This would involve minimal changes to building interiors and a lesser need for capital investment. When claiming that there had been â&#x20AC;&#x153;10 years of mucking aroundâ&#x20AC;?, Cr Rodgers has forgotten that the Quarantine Station land only came back to Victoria in 2009, that the national park management plan was finalised in that same year, and a master plan drafted in 2010. The â&#x20AC;&#x153;mucking aroundâ&#x20AC;? actually began with the change of government, the sidelining of Parks Victoria by the Department of Environment and Primary Industries in the park planning process, and the plans by the Coalition government to facilitate major commercial developments within national parks. Of course, funds will be required to turn the Quarantine Station into a lively place that includes activities in education, tourism, art, research and conservation. Some of that money will need to come from government, but investment will also be needed from philanthropic, community, education and tourism organisations. In this way there will be a diversity of use with the best interests of Point Nepean National Park at heart. VNPA will work to ensure that happens. Chris Smyth, acting executive director Victorian National Parks Association

Avoid disappointment Comments from Peter Curtin of Sorrento (â&#x20AC;&#x153;Point misunderstoodâ&#x20AC;?, Letters 4/8/15) highlight the potential futility of going forward with a revision of the 2010 master plan and a possible further project procurement process, which may again leave the local community both disappointed and frustrated at the lack of action in restoring and preserving Point Nepean. On the one hand, we have a state government that allegedly is not against private investment in national parks, whereas the policy position of the Victorian National Parks Association is that

it is fundamentally against private developments of any substance (perhaps nothing more than a kiosk?) in national parks. If the state government seriously thinks that the private sector will commit time, resources and funds to participate in another public tender process for Point Nepean while any uncertainty remains as to the role or attitude of the VNPA in that process, then they would be unquestionably misguided. A robust process only occurs when a government provides proponents with absolute clarity and certainty. Any doubts or uncertainty as to any aspect of the process will lead to poor participation and a potentially flawed outcome or no result. Given the VNPA's strategic position concerning Point Nepean, its role and influence in the tender process must be clearly stated. If the government expects that the selected private sector proponent will assume the similar responsibilities and risks as to park maintenance and repairs as well as to the restoration of the Quarantine Station that Point Leisure Group had contractually obligated to deliver, then it is inconceivable that a lesser scope of development to what PLG proposed could possibly deliver such an outcome. If the government was to remove these obligations from the preferred proponent, it then begs the question: why are you going through the master plan revision and potentially another tender process if you are not receiving any direct reduction in the level of public funding in the upkeep and restoration of the Point Nepean National Park or direct stimulus to the local community?" So before the state government attempts to build community expectations once again through another expensive master plan process, perhaps it could tell us all exactly what the VNPA is prepared to accept by way of private development, so as we don't end up with another "tail wagging the dog" outcome that determined the fate of the Point Leisure Group project. Stuart Allen, Dromana

struction phase of the Peninsulaâ&#x20AC;&#x2122;s biggest project this side of Frankston - the RACV resort, Cape Schanck â&#x20AC;&#x201C; at least according to council officers and councillors. That may be true, but Iâ&#x20AC;&#x2122;ve got news for them â&#x20AC;&#x201C; those jobs are not l likely to come to peninsula residents. A developer friend has told me that the tender documentation has gone out to high-end tier 2 construction companies in the big smoke, as one would expect for a $135 million build and fit out. But guess what, all of these companies and their sub-contractors have their own workforces already in place. They wonâ&#x20AC;&#x2122;t be looking for locals. And before anyone suggests itâ&#x20AC;&#x2122;s too far for uptown people to travel down here every day to work, they did for the RACV Torquay development. Just ask the successful tenderer for that construction job. Oh wait, they wonâ&#x20AC;&#x2122;t want to answer because they have been invited to tender for the Cape Schanck job too. Irene Wyld, Cape Schanck

Residents ignored The shire councilâ&#x20AC;&#x2122;s 13 July decision to approve the RACV Cape Schanck resort development, with its seven-storey, 30-metre high, 120-room complex, disappointed the 82 per cent of Cape Schanck residents who were against it. Nine residents representing more than 400 people spoke against what will be the highest building south of Frankston. Surprisingly, the council discounted the Victorian Design Review Panel (Office of the Victorian Government Architect) report that asked the RACV to consider excavating deeper to lower the height of the building. The council meeting heard that the resort would attract conferences and help peninsula tourism to be â&#x20AC;&#x153;open for businessâ&#x20AC;? all year rather than just in summer, but residents argued that lowering the building height would still achieve this goal. It was only after the meeting heard from Mornington Peninsula Regional Tourism Board chairman Tracey Cooper, before councillors voted on the proposal, that I started to join the dots.

The councilâ&#x20AC;&#x2122;s delegates on the tourism board are councillors Antonella Celi and Tim Wood (who was absent on the night of the vote) and the substitute representatives are Anne Shaw and David Garnock. The motion to approve the RACV development was moved by Cr Celi and seconded by Cr Shaw. For the resort were Crs Celi, Shaw, Garnock and David Gibb. In trying to understand the councilâ&#x20AC;&#x2122;s decision, I see a connection between those proposing and voting for the decision and Ms Cooper together with Cape Schanck Resort manager Conleth Roche, with all having worked together on the regional tourism board. So we have a situation where the council contributes to the funding of the tourism board, provides councillors as delegates, and the only two councillors to speak for the $135 million development were tourism board members. Also, the RACV sponsors the 2015 Victorian Tourism Awards, which are of benefit to the regional tourism board. This leads to a question we all understand: Does it pass the â&#x20AC;&#x153;sniffâ&#x20AC;? test? Ian Renwick, Cape Schanck

Cancellation anger Domenico de Clarioâ&#x20AC;&#x2122;s cancellation of a (free) public performance planned for Friday 31 July at Pier St, Dromana was a shock. Apparently an anonymous complaint was made to Mornington Peninsula Shire Council about the music and fluoro lights appearing in an empty shop at night. What a pity that an important artist and teacher of Professor de Clarioâ&#x20AC;&#x2122;s international reputation has been treated so dismissively by our council for disturbing this quiet village in mid-winter. His thoughtful displays and nostalgic musical performances presented various installations, poems, drawings and nostalgic music since the equinox in May, at no cost to this community. One wonders who else enjoyed these totally unadvertised artworks that just appeared in Dromana? I am really annoyed that I missed out on the final, full moon presentation. Continued Page 16