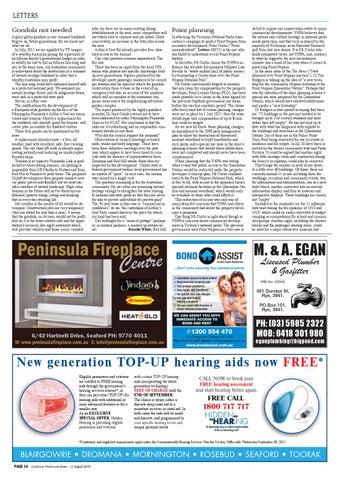 LETTERS Gondola not needed A glary glitzy gondola in rare remnant bushland: forgive us, future generations, for we know not what we do. In July, 2015 we are appalled by TV images of a wealthy American paying the equivalent of an African family’s generational budget in order to satisfy his lust to kill an African lion king and yet, at the same time, our Australian community is ambivalent about the destruction of a remnant of natural heritage bushland in order that a wealthy Australian may profit . The lion king could have assumed himself safe in a protected national park. We assumed our natural heritage forest, and its indigenous fauna, were safe in a protected state park. Not so, in either case. The justifications for the development of a European-style gondola up the face of the Mornington Peninsula’s Arthur’s Seat are many, varied and tenuous: Merely a replacement for the outdated, old chairlift; good for tourism; will create jobs; accessible for disabled visitors. These four points can be questioned as follows. A replacement already exists – a free, all weather road with excellent, safe, free viewing points. The old chair lift route is already regenerating naturally and restoring an uninterrupted forested slope. Tourism is at capacity. Peninsula Link is gridlocked at times during summer, car parking is impossible from Mt Martha to Portsea and from Red Hill to Flinders at peak times. The proposed Skylift development does propose massive new car parks (paved and floodlit) but we must sacrifice swathes of natural landscape. High value tourism in the future will not be about airconditioned, passive riding, eating and drinking … that is every day working life. Job creation is the mantra of all would-be developers. Construction jobs are very temporary (this one slated for less than a year). It seems that the gondola, on its own, would not be profitable so it is the lower station cafe and the upper station’s licenced, late night restaurant which will provide viability and those much- vaunted

jobs. As there are so many existing dining establishments in the area, more competition will inevitably lead to closures and job losses. Quite conceivably, no increase in the total jobs across the area. Arthur’s Seat Rd already provides free, disabled access to the summit. One vital question remains unanswered: The fire risk. There has been no input from the local CFA teams who possess site specific knowledge built up over generations. Figures produced by the developer quote passenger numbers to be carried per rotation and the speed at which the gondola could return them to base in the event of an emergency but take no account of the numbers which will accumulate at the restaurant, bar, picnic areas and at the neighbouring adventure garden complex. The report produced by the highly qualified scientist, Dr Janet Stanley seems not to have been addressed by either Mornington Peninsula Shire or by VCAT. Her conclusion is that the risks are overwhelming and no responsible community should accept them. Why did the council support the proposal? Observations at council meetings revealed nods, winks and body language. There have been three definitive meetings over the past year which appear to have been timed to coincide with the absence of representatives from Dromana and Red Hill wards, those directly impacted by the development. Unlike state or federal government bodies, local government has no system of “pairs”. In each case, the motion was carried by a single vote. The question remaining is for the Australian community. Do we value our remaining natural heritage enough to strengthen the laws relating to national and state parks so that they are never for sale to private individuals for private gain? The 50-year lease in this case is “commercial in confidence” so we, the custodians of Arthur’s Seat Park, cannot discover the price for which our land has been sold. Our birthright for a “mess of pottage” perhaps or, in modern parlance, a messed up natural asset. Rosalie White, Red Hill

Point planning In attacking the Victorian National Parks Association’s campaign to protect Point Nepean from excessive development, Peter Curtin (“Point misunderstood”, Letters 3/8/15) is the one who has failed to understand recent Point Nepean history. In his letter, Mr Curtin claims the VNPA’s influence has led state Environment Minister Lisa Neville to “waste million [sic] of public money by terminating a Crown lease over the Point Nepean National Park”. Mr Curtin conveniently forgets to mention that any claim for compensation by the property developer, Point Leisure Group (PLG), has been made possible by a clause in the lease signed by the previous Napthine government just hours before the election caretaker period. The clause effectively said that if certain planning changes were not in place by 1 July 2015, then the lease would lapse and compensation of up to $1million could be sought. As we now all know, those planning changes, an amendment to the 2009 park management plan to allow the destruction of threatened moonah woodland to build boardwalks and rock pools, and a special use zone in the shire’s planning scheme that would allow subdivision, were not completed and should never have been countenanced. When claiming that the VNPA was wrong when it said that public access to the Quarantine Station would be restricted under the property developer’s concept plan, Mr Curtin confuses entry to the Point Nepean National Park, which is free to all, with access to the proposed luxury spa and wellness facilities in the Quarantine Station and moonah woodland, which would only be available to those who could afford it. This restriction of access was only one of many deep-felt concerns that VNPA and others in the community had about the property developer’s proposals. One thing Mr Curtin is right about though is VNPA’s concerns about commercial development in Victoria’s national parks. The previous government used Point Nepean as a test case in

its bid to expose our conservation estate to major commercial developments. VNPA believes that the natural and cultural heritage in national parks needs protection, and that view is shared by the majority of Victorians, as an Essential Research poll from last year shows. It is Mr Curtin who holds antiquated views, not VNPA, and, contrary to what he suggests, the new environment minister has a mind of her own when it comes to protecting Point Nepean. In the same issue of the The News (“State slammed over Point Nepean inaction”), Cr Tim Rodgers is talking up the idea of “a new township for the community, Nepean township at the Point Nepean Quarantine Station”. Perhaps that was the intention of the shire planning scheme’s special use zone proposed for the Quarantine Station, which would have allowed subdivision and maybe a “new township”. Cr Rodgers is also quoted as saying that there are “75 buildings in the precinct needed to be brought up to 21st century standard and used rather than left empty”. He has not kept up to date with what has happened with regards to the buildings and structures in the Quarantine Station. Six of them are in the Police Point Shire Park being renovated for use by artists in residence and for respite. In all, 18 have been removed by the former community trust and Parks Victoria. It could be argued that another eight, with little heritage value and constructed during the Army’s occupation, could also be removed. That brings the number in need of use down to a little over 40 buildings. Of those, there are currently around 11 in use including three for weddings, reception and community events, two for information and administration, one as a new toilet block, another converted into an arrivals information display, and four as museum and interpretive displays. These buildings are clearly not “empty”. Included in the remainder are the 11 influenza huts built during the flu epidemic of 1918 and 1919, which could be easily converted to budget camping accommodation for school and community groups. Another eight, including the shower blocks and the passenger waiting room, could be used for a major interactive museum and

with certain hearing needs to beTOP-UP experienced to be aids incorporating the islatest appreciated, which why we’re generation offering atechnology FREE TRIAL to the FREE OFpeople CHARGE until theto ¿rst 50 who respond END SEPTEMBER. thisOF offer. Hear and enjoy the The choice isfor yours, eitherYou a will difference yourself. discrete deep canal aid or a be impressed. miniature receiver in canal aid. In As an EXCLUSIVE short term both cases theOFFER, aids will Hidden be small SPECIAL andHearing discrete, programmed is and providing eligibleto \RXUVSHFL¿FKHDULQJOHYHOVDQG pensioners and veterans unique personal needs.