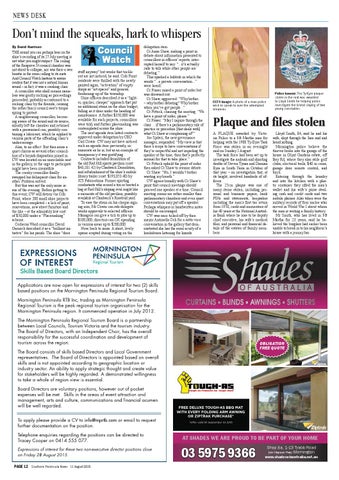 Don’t mind the squeaks, hark to whispers By David Harrison THE sound you can perhaps hear on the shire’s recording of its 27 July meeting is not what you might suspect. The ceiling of the Besgrove St council chamber was not about to collapse, nor was there a wee beastie in the room calling to its mate. And Council Watch hastens to assure readers that it was not a natural human sound – in fact, it was a creaking chair. A councillor who shall remain nameless was gently rocking as proceedings proceeded, probably accustomed to a rocking chair by the fireside, causing the rather fancy council seat’s torque spring to protest. A neighbouring councillor, becoming aware of the sound and its source, silently left the chamber and returned with a pressurised can, possibly containing a lubricant, which he applied to various parts of the offending chair’s undercarriage. Alas, to no effect. But then arose a quiet chorus as several other councillors of a boyish disposition joined in. CW was located on an unrockable seat in the gallery, or the urge to participate might have been irresistible. The creaky councillor finally swapped his delinquent chair for another. Problem solved. But this was not the only noise issue of the evening. Before getting to this event, CW will detour via Crib Point, where 200 small shire projects have been completed – a lick of paint, renovations, new street furniture and the like – at the admirably low cost of $50,000 under a “Placemaking” scheme. Cerberus Ward councillor David Garnock described it as a “brilliant initiative” for his parish. The shire “does

stuff anyway” but works that trickle out are not noticed, he said. Crib Point residents were thrilled with the newly painted signs, “activation” of empty shops as “art spaces” and general freshening-up of the township. Shire officers described it as a “lighter, quicker, cheaper” approach that put no additional strain on the shire budget, falling as it does under the heading of maintenance. A further $350,000 was available for such projects, councillors were told, and further placemaking was contemplated across the shire. The next agenda item listed contracts approved under delegation by CEO Carl Cowie. CW may not have noticed such an agenda item previously, innumerate as he is, but as an example of transparency it was gratifying. Contracts included demolition of the old Red Hill sports pavilion (cost: $43,181.42) by Chadwick Demolition, and refurbishment of the shire’s mobile library trailer (cost: $193,053.40) by JCS Fabrications. Former sporting combatants who scored a ton or booted a bag at Red Hill’s sloping oval might like a memento of the old pavilion, possibly available at Chadwick’s Rosebud yard. To ease the strain on his cheque-signing arm, Mr Cowie can sub-delegate works approvals to selected officers. Managers can give a tick to jobs up to $100,000; directors can OK spending in various areas up to $200,000. Now, back to noise. A short, lively uproar erupted during voting on the

delegation item. Cr Anne Shaw, making a point in debate about information presented to councillors in officers’ reports, interrupted herself to say: “...it’s actually rude to talk while other people are debating.” This sparked a hubbub in which the words “...a private conversation...” were heard. Cr Fraser raised a point of order but was drowned out. Cr Shaw, aggrieved: “Why bother – why bother debating? Why bother when you’ve got people...” Cr Pittock, chairing the meeting: “We have a point of order, please.” Cr Fraser: “May I inquire through the chair ... if there’s a parliamentary rule of practice or procedure [that deals with] what Cr Shaw is complaining of?” Joe Spiteri, the new governance manager, responded: “My view is that there’s scope to have conversations if they’re respectful and not impeding the speaker at the time, then that’s perfectly normal for that to take place.” Cr Pittock upheld the point of order then asked Cr Shaw to resume debate. Cr Shaw: “No, I wouldn’t bother wasting my breath.” CW agrees broadly with Cr Shaw’s point that council meetings should proceed one speaker at a time. Council meeting rooms are rather smaller than parliamentary chambers and even quiet conversations may put off a speaker. Perhaps whispers or handwritten notes should be encouraged. CW was once ticked off by then mayor Antonella Celi for a sotto voce conversation in the gallery that demonstrated she has the aural acuity of a kookaburra listening for lizards.

Police honour: The Ty-Eyre plaque stolen in the raid was awarded to Lloyd Smith for helping police investigate the brutal slaying of two young constables.

CCTV image: A photo of a man police wish to speak to over the attempted break-ins

Plaque and files stolen A PLAQUE awarded by Victoria Police to a Mt Martha man for helping with the 1988 Ty-Eyre Task Force was stolen in an overnight raid on Sunday 2 August. The task force had been set up to investigate the ambush and shooting deaths of Steven Tynan and Damian Eyre in South Yarra in October of that year – an investigation that, at its height, involved hundreds of officers. The 25cm plaque was one of many items stolen, including personal and business papers, bank PINs and statements, keepsakes including the man’s first tax return from 1950, cards and mementoes of his 40 years at the National Australia Bank where he rose to be deputy chief executive, his wife’s medical files, and personal and financial details of the estates of family members.

Lloyd Smith, 84, said he and his wife, slept through the 3am raid and heard nothing. Mornington police believe the thieves broke into the garage of the house in Glynt Gardens estate, off Bay Rd, where they also stole golf clubs, electrical tools, $40 in coins, garage door remote control, and torch. Entering through the laundry and into the kitchen with a plastic container they rifled the man’s wallet and his wife’s purse stealing cash and credit cards and two mobile phones. Also taken were the military records of four uncles who served in World War I about whom the man is writing a family history. Mr Smith, who has lived in Mt Martha for 23 years, said he believed the burglars had earlier been unable to break in to his neighbour’s house with a jemmy bar.