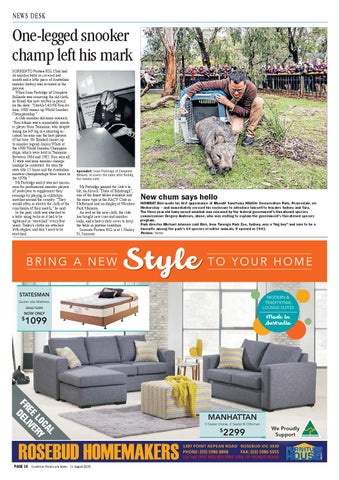 One-legged snooker champ left his mark SORRENTO Portsea RSL Club had its snooker table re-covered last month and a little piece of Australian snooker history was revealed in the process. When Sean Partridge of Complete Billiards was removing the old cloth, he found this note written in pencil on the slate: “Stretch 14/1/96 Ron Atkins, 1980 runner-up World Snooker Championship.” A club member did some research. “Ron Atkins was a remarkable snooker player from Tasmania, who despite losing his left leg in a shooting accident, became one the best players of his time. He finished runner-up to snooker legend Jimmy White at the 1980 World Snooker Championships, which were held in Tasmania. Between 1964 and 1987, Ron won all 32 state and zone snooker championships he contested. He won the state title 15 times and the Australian amateur championships three times in the 1970s.” Mr Partridge said it was not uncommon for professional snooker players of yesteryear to supplement their earnings by playing in exhibition matches around the country. “They would often re-stretch the cloth at the conclusion of their match,” he said. In the past, cloth was attached to a table using tacks so it had to be tightened or “stretched” every few years. Today’s cloths are attached with staples, and don’t need to be stretched.

Mr Partridge praised the club’s table, an Alcock “Duke of Edinburgh”, one of the finest tables available and the same type in the RACV Club in Melbourne and on display at Werribee Park Mansion. As well as the new cloth, the club has bought new cues and snooker balls, and a heavy duty cover to keep the table in pristine condition. Sorrento Portsea RSL is at 1 Hurley St, Sorrento.

WOMBAT Birri made his first appearance at Moonlit Sanctuary Wildlife Conservation Park, Pearcedale, on Wednesday – and immediately crossed his enclosure to introduce himself to females Sydney and Tara. The three-year-old hairy-nosed wombat was released by the federal government’s threatened species commissioner Gregory Andrews, above, who was visiting to explain the government’s threatened species program. Park director Michael Johnson said Birri, from Taronga Park Zoo, Sydney, was a “big boy” and sure to be a favourite among the park’s 60 species of native animals. It opened in 2001. Picture: Yanni