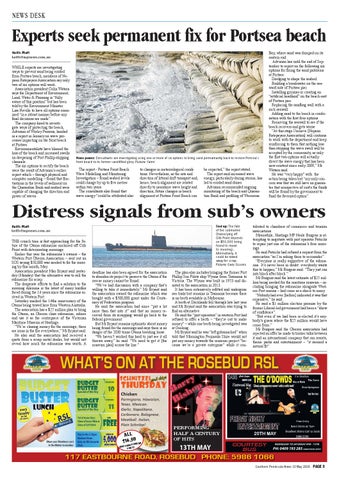 Experts seek permanent fix for Portsea beach Keith Platt keith@mpnews.com.au WHILE experts are investigating ways to prevent sand being eroded from Portsea beach, members of Nepean Ratepayers Association say only two of six options will work. Association president Colin Watson says the Department of Environment, Land, Water & Planning is “fully aware of this position” but has been told by the Environment Minister Lisa Neville to have all options examined “in a robust manner before any final decisions are made”. The company hired to investigate ways of protecting the beach, Advisian of Worley Parsons, handed in a report in January on wave processes impacting on the front beach at Portsea. Environmentalists have blamed the loss of the beach and increased swells on deepening of Port Phillip shipping channels. The six options to rectify the beach were the result of Advisian’s earlier report which – through physical and computer modelling – found that fluctuations in the levels of sediment on the Quarantine Bank and seabed were capable of changing the direction and power of waves.

Wave power: Consultants are investigating using one or more of six options to bring sand permamantly back to restore Portsea’s front beach to its former sand-filled glory. Picture: Yanni

The report - Portsea Front Beach Wave Modelling and Monitoring Investigation – found seabed levels could change by up to five metres within two years. The consultants also found that wave energy “could be attributed also

be expected,” the report stated. The report said increased wave energy, particularly during storms, has led to eroded sand dunes. Advisian recommended ongoing monitoring of the beach and Quarantine Bank and profiling of Weeroona

Bay, where sand was dumped on its eastern end. Advisian has until the end of September to report on the following six options for fixing the sand problems at Portsea: Dredging to shape the seabed. Building a breakwater on the seaward side of Portsea pier. Installing groynes or creating an “artificial headland” on the beach east of Portsea pier. Replacing the sandbag wall with a rock seawall. Adding sand to the beach in combination with the first four options. Removing the seawall to see if the beach recovers and gets worse. “At this stage I believe [Nepean Ratepayers Association] will continue to work with the department and keep reinforcing to them that nothing less than stopping the wave swell will be accepted by the community, as only the first two options will actually divert the wave energy that has been now existent since early 2009,” Mr Watson said. He was “very happy” with the action being taken but “my only concern was that we still have no guarantee that irrespective of cost's the funds will be found by the government to fund the favoured option”.

Distress signals from sub’s owners Keith Platt keith@mpnews.com.au THE crunch time is fast approaching for the future of the Otama submarine anchored off Crib Point with deteriorating moorings. Earlier this year the submarine’s owners – the Western Port Oberon Association – sent out an SOS saying $50,000 was needed to fix the mooring by this month, May. Association president Max Bryant said yesterday (Monday) that the alternative was to sell the submarine for scrap. The desperate efforts to find a solution to the mooring dilemma is the latest of many hurdles faced during the 14 years since the submarine arrived in Western Port. Saturday marked the 14the anniversary of the Otama being towed here from Western Australia. The association has a $25 million plan to bring the Otama, an Oberon class submarine, ashore and use it as the centrepiece of the Victorian Maritime Museum at Hastings. “We’re chasing money for the moorings; there are irons in the fire everywhere,” Mr Bryant said. He also said the association had received a quote from a scrap metal dealer, but would not reveal how much the submarine was worth. A

Tied up: The fate of the submarine Otama lying off Crib Point depends on $50,000 being found to repair its moorings. Alternatively, it could be towed away for scrap. Picture: Gary Sissons

deadline has also been agreed for the association to abandon its project to preserve the Otama if the rescue money cannot be found. “We’ve had discussion with a company that’s willing to take it immediately.” Mr Bryant said the association owned the submarine which was bought with a $500,000 grant under the Centenary of Federation program. He said the association had since “put a lot more than that into it” and that no money received from its scrapping would go back to the federal government. But Mr Bryant remains optimistic about money being found for the moorings and says there is no danger of the 2030 tonne Otama breaking loose. “We haven’t worked this hard to just see it all thrown away,” he said. “We need to get it [the museum plan] across the line.”

The plan also includes bringing the former Port Phillip Sea Pilots ship Wyuna from Tasmania to Victoria. The Wyuna was built in 1953 and donated to the association in 2013. It has been extensively refitted and undergone sea trials but remains in Tasmania because there is no berth available in Melbourne. A berth at Docklands fell through late last year and Mr Bryant said the association was trying to find an alternative. He said the “port operators” in western Port had refused to offer a berth – “they’re out to make money” – while one berth being investigated was at Geelong. Mr Bryant said he was “left gobsmacked” when told that Mornington Peninsula Shire would not put any money towards the museum project “because we’re a private enterprise” while it con-

tributed to chambers of commerce and tourism associations. Meanwhile, Hastings MP Neale Burgess is attempting to negotiate with port operator Patricks to repair just one of the submarine’s four moorings. He said Patricks had refused a request from the association “so I’m asking them to reconsider”. “Everyone is really supportive of the submarine. It’s never been in doubt: everybody wants this to happen,” Mr Burgess said. “They just run into block after block.” Mr Burgess said the latest estimate of $25 million being needed for the maritime museum – including bringing the submarine alongside Western Port marina – had come as a shock to many. “Nobody had ever [before] indicated it was that expensive,” he said. He said a $1 million election promise by the former Liberal-led government had been a “show of confidence”. “But even if we had been re-elected it’s anybody’s guess where the $25 million would have come from.” Mr Burgess said the Oberon association had rejected an offer he made to broker talks between it and an international company that ran resorts, theme parks and entertainment – “it seemed a natural fit”.

WHAT’S ON AT THE ROSEBUD RSL y r r thursday y a B hop Chicken s i Parmigiana, Hawaiian, B

PERFORMING HALF A CENTURY OF HITS