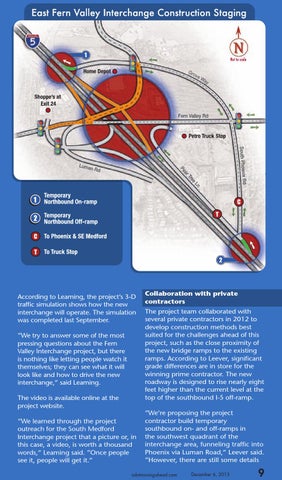 According to Leaming, the project’s 3-D traffic simulation shows how the new interchange will operate. The simulation was completed last September. “We try to answer some of the most pressing questions about the Fern Valley Interchange project, but there is nothing like letting people watch it themselves; they can see what it will look like and how to drive the new interchange,” said Leaming. The video is available online at the project website. “We learned through the project outreach for the South Medford Interchange project that a picture or, in this case, a video, is worth a thousand words,” Leaming said. “Once people see it, people will get it.”

Collaboration with private contractors The project team collaborated with several private contractors in 2012 to develop construction methods best suited for the challenges ahead of this project, such as the close proximity of the new bridge ramps to the existing ramps. According to Leever, significant grade differences are in store for the winning prime contractor. The new roadway is designed to rise nearly eight feet higher than the current level at the top of the southbound I-5 off-ramp. “We’re proposing the project contractor build temporary southbound on- and off-ramps in the southwest quadrant of the interchange area, funneling traffic into Phoenix via Luman Road,” Leever said. “However, there are still some details