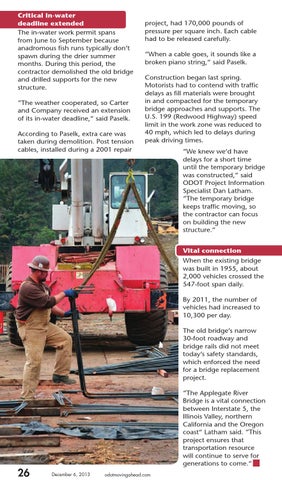 Critical in-water deadline extended The in-water work permit spans from June to September because anadromous fish runs typically don’t spawn during the drier summer months. During this period, the contractor demolished the old bridge and drilled supports for the new structure. “The weather cooperated, so Carter and Company received an extension of its in-water deadline,” said Paselk. According to Paselk, extra care was taken during demolition. Post tension cables, installed during a 2001 repair

project, had 170,000 pounds of pressure per square inch. Each cable had to be released carefully. “When a cable goes, it sounds like a broken piano string,” said Paselk. Construction began last spring. Motorists had to contend with traffic delays as fill materials were brought in and compacted for the temporary bridge approaches and supports. The U.S. 199 (Redwood Highway) speed limit in the work zone was reduced to 40 mph, which led to delays during peak driving times. “We knew we’d have delays for a short time until the temporary bridge was constructed,” said ODOT Project Information Specialist Dan Latham. “The temporary bridge keeps traffic moving, so the contractor can focus on building the new structure.” Vital connection When the existing bridge was built in 1955, about 2,000 vehicles crossed the 547-foot span daily. By 2011, the number of vehicles had increased to 10,300 per day. The old bridge’s narrow 30-foot roadway and bridge rails did not meet today’s safety standards, which enforced the need for a bridge replacement project.

“The Applegate River Bridge is a vital connection between Interstate 5, the Illinois Valley, northern California and the Oregon coast” Latham said. “This project ensures that transportation resource will continue to serve for generations to come.” December 6, 2013