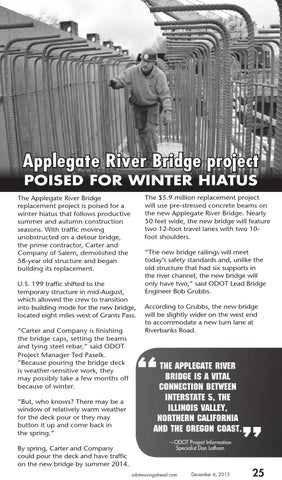 The Applegate River Bridge replacement project is poised for a winter hiatus that follows productive summer and autumn construction seasons. With traffic moving unobstructed on a detour bridge, the prime contractor, Carter and Company of Salem, demolished the 58-year old structure and began building its replacement. U.S. 199 traffic shifted to the temporary structure in mid-August, which allowed the crew to transition into building mode for the new bridge, located eight miles west of Grants Pass. “Carter and Company is finishing the bridge caps, setting the beams and tying steel rebar,” said ODOT Project Manager Ted Paselk. “Because pouring the bridge deck is weather-sensitive work, they may possibly take a few months off because of winter. “But, who knows? There may be a window of relatively warm weather for the deck pour or they may button it up and come back in the spring.” By spring, Carter and Company could pour the deck and have traffic on the new bridge by summer 2014.

“The new bridge railings will meet today’s safety standards and, unlike the old structure that had six supports in the river channel, the new bridge will only have two,” said ODOT Lead Bridge Engineer Bob Grubbs. According to Grubbs, the new bridge will be slightly wider on the west end to accommodate a new turn lane at Riverbanks Road.