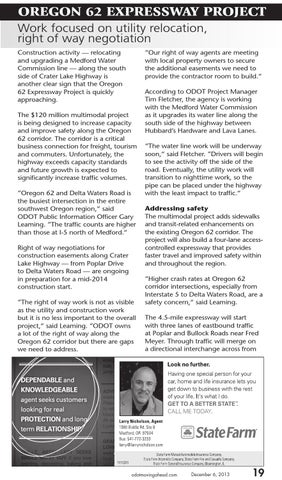 OREGON 62 EXPRESSWAY PROJECT Work focused on utility relocation, right of way negotiation “Our right of way agents are meeting with local property owners to secure the additional easements we need to provide the contractor room to build.”

Construction activity — relocating and upgrading a Medford Water Commission line — along the south side of Crater Lake Highway is another clear sign that the Oregon 62 Expressway Project is quickly approaching. The $120 million multimodal project is being designed to increase capacity and improve safety along the Oregon 62 corridor. The corridor is a critical business connection for freight, tourism and commuters. Unfortunately, the highway exceeds capacity standards and future growth is expected to significantly increase traffic volumes. “Oregon 62 and Delta Waters Road is the busiest intersection in the entire southwest Oregon region,” said ODOT Public Information Officer Gary Leaming. “The traffic counts are higher than those at I-5 north of Medford.” Right of way negotiations for construction easements along Crater Lake Highway — from Poplar Drive to Delta Waters Road — are ongoing in preparation for a mid-2014 construction start. “The right of way work is not as visible as the utility and construction work but it is no less important to the overall project,” said Leaming. “ODOT owns a lot of the right of way along the Oregon 62 corridor but there are gaps we need to address.

According to ODOT Project Manager Tim Fletcher, the agency is working with the Medford Water Commission as it upgrades its water line along the south side of the highway between Hubbard’s Hardware and Lava Lanes. “The water line work will be underway soon,” said Fletcher. “Drivers will begin to see the activity off the side of the road. Eventually, the utility work will transition to nighttime work, so the pipe can be placed under the highway with the least impact to traffic.” Addressing safety The multimodal project adds sidewalks and transit-related enhancements on the existing Oregon 62 corridor. The project will also build a four-lane accesscontrolled expressway that provides faster travel and improved safety within and throughout the region. “Higher crash rates at Oregon 62 corridor intersections, especially from Interstate 5 to Delta Waters Road, are a safety concern,” said Leaming. The 4.5-mile expressway will start with three lanes of eastbound traffic at Poplar and Bullock Roads near Fred Meyer. Through traffic will merge on a directional interchange across from