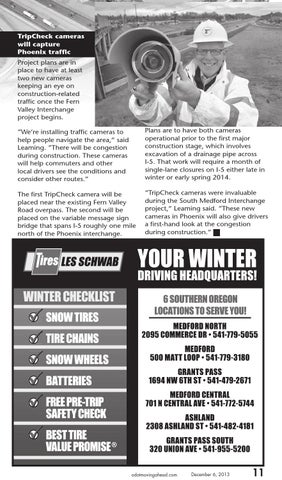 TripCheck cameras will capture Phoenix traffic Project plans are in place to have at least two new cameras keeping an eye on construction-related traffic once the Fern Valley Interchange project begins. “We’re installing traffic cameras to help people navigate the area,” said Leaming. “There will be congestion during construction. These cameras will help commuters and other local drivers see the conditions and consider other routes.”

Plans are to have both cameras operational prior to the first major construction stage, which involves excavation of a drainage pipe across I-5. That work will require a month of single-lane closures on I-5 either late in winter or early spring 2014.

The first TripCheck camera will be placed near the existing Fern Valley Road overpass. The second will be placed on the variable message sign bridge that spans I-5 roughly one mile north of the Phoenix interchange.

“TripCheck cameras were invaluable during the South Medford Interchange project,” Leaming said. “These new cameras in Phoenix will also give drivers a first-hand look at the congestion during construction.”