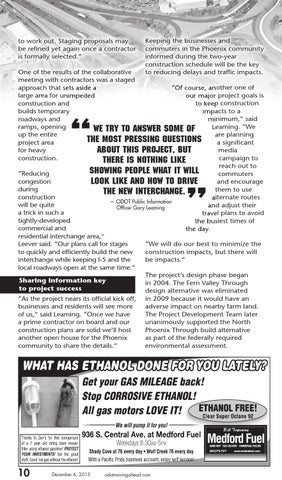 to work out. Staging proposals may be refined yet again once a contractor is formally selected.”

Keeping the businesses and commuters in the Phoenix community informed during the two-year construction schedule will be the key to reducing delays and traffic impacts.

One of the results of the collaborative meeting with contractors was a staged “Of course, another one of approach that sets aside a our major project goals is large area for unimpeded to keep construction construction and impacts to a builds temporary minimum,” said roadways and Leaming. “We ramps, opening We try to answer some of are planning up the entire the most pressing questions a significant project area media for heavy about this project, but campaign to construction. there is nothing like reach out to showing people what it will “Reducing commuters congestion and encourage look like and how to drive during them to use the new interchange. construction alternate routes — ODOT Public Information will be quite and adjust their Officer Gary Leaming a trick in such a travel plans to avoid tightly-developed the busiest times of commercial and the day. residential interchange area,” “We will do our best to minimize the Leever said. “Our plans call for stages construction impacts, but there will to quickly and efficiently build the new be impacts.” interchange while keeping I-5 and the local roadways open at the same time.” The project’s design phase began Sharing information information key key to in 2004. The Fern Valley Through Sharing to project success design alternative was eliminated project success “As the project nears its official kick off, in 2009 because it would have an adverse impact on nearby farm land. businesses and residents will see more The Project Development Team later of us,” said Leaming. “Once we have unanimously supported the North a prime contractor on board and our Phoenix Through build alternative construction plans are solid we’ll host as part of the federally required another open house for the Phoenix environmental assessment. community to share the details.”