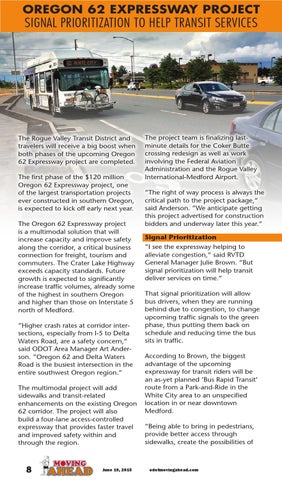 The Rogue Valley Transit District and travelers will receive a big boost when both phases of the upcoming Oregon 62 Expressway project are completed. The first phase of the $120 million Oregon 62 Expressway project, one of the largest transportation projects ever constructed in southern Oregon, is expected to kick off early next year. The Oregon 62 Expressway project is a multimodal solution that will increase capacity and improve safety along the corridor, a critical business connection for freight, tourism and commuters. The Crater Lake Highway exceeds capacity standards. Future growth is expected to significantly increase traffic volumes, already some of the highest in southern Oregon and higher than those on Interstate 5 north of Medford. “Higher crash rates at corridor intersections, especially from I-5 to Delta Waters Road, are a safety concern,” said ODOT Area Manager Art Anderson. “Oregon 62 and Delta Waters Road is the busiest intersection in the entire southwest Oregon region.”

The project team is finalizing lastminute details for the Coker Butte crossing redesign as well as work involving the Federal Aviation Administration and the Rogue Valley International-Medford Airport. “The right of way process is always the critical path to the project package,” said Anderson. “We anticipate getting this project advertised for construction bidders and underway later this year.” Signal Prioritization “I see the expressway helping to alleviate congestion,” said RVTD General Manager Julie Brown. “But signal prioritization will help transit deliver services on time.” That signal prioritization will allow bus drivers, when they are running behind due to congestion, to change upcoming traffic signals to the green phase, thus putting them back on schedule and reducing time the bus sits in traffic. According to Brown, the biggest advantage of the upcoming expressway for transit riders will be an as-yet planned ‘Bus Rapid Transit’ route from a Park-and-Ride in the White City area to an unspecified location in or near downtown Medford.

The multimodal project will add sidewalks and transit-related enhancements on the existing Oregon 62 corridor. The project will also June 26, 2015 odotmovingahead.com build a four-lane access-controlled “Being able to bring in pedestrians, expressway that provides faster travel provide better access through and improved safety within and sidewalks, create the possibilities of through the region.