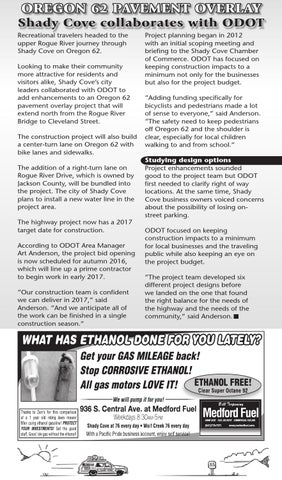 Shady Cove collaborates with ODOT Recreational travelers headed to the upper Rogue River journey through Shady Cove on Oregon 62. Looking to make their community more attractive for residents and visitors alike, Shady Cove’s city leaders collaborated with ODOT to add enhancements to an Oregon 62 pavement overlay project that will extend north from the Rogue River Bridge to Cleveland Street. The construction project will also build a center-turn lane on Oregon 62 with bike lanes and sidewalks. The addition of a right-turn lane on Rogue River Drive, which is owned by Jackson County, will be bundled into the project. The city of Shady Cove plans to install a new water line in the project area. The highway project now has a 2017 target date for construction. According to ODOT Area Manager Art Anderson, the project bid opening is now scheduled for autumn 2016, which will line up a prime contractor to begin work in early 2017. “Our construction team is confident we can deliver in 2017,” said Anderson. “And we anticipate all of the work can be finished in a single construction season.”

Project planning began in 2012 with an initial scoping meeting and briefing to the Shady Cove Chamber of Commerce. ODOT has focused on keeping construction impacts to a minimum not only for the businesses but also for the project budget. “Adding funding specifically for bicyclists and pedestrians made a lot of sense to everyone,” said Anderson. “The safety need to keep pedestrians off Oregon 62 and the shoulder is clear, especially for local children walking to and from school.” Studying design options Project enhancements sounded good to the project team but ODOT first needed to clarify right of way locations. At the same time, Shady Cove business owners voiced concerns about the possibility of losing onstreet parking. ODOT focused on keeping construction impacts to a minimum for local businesses and the traveling public while also keeping an eye on the project budget. “The project team developed six different project designs before we landed on the one that found the right balance for the needs of the highway and the needs of the community,” said Anderson.