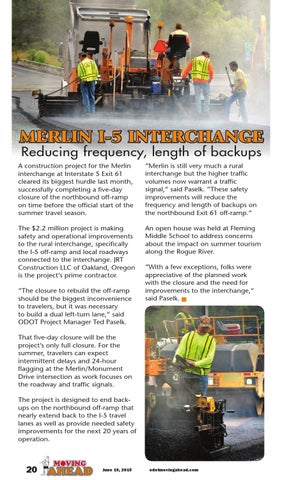 A construction project for the Merlin interchange at Interstate 5 Exit 61 cleared its biggest hurdle last month, successfully completing a five-day closure of the northbound off-ramp on time before the official start of the summer travel season.

“Merlin is still very much a rural interchange but the higher traffic volumes now warrant a traffic signal,” said Paselk. “These safety improvements will reduce the frequency and length of backups on the northbound Exit 61 off-ramp.”

The $2.2 million project is making safety and operational improvements to the rural interchange, specifically the I-5 off-ramp and local roadways connected to the interchange. JRT Construction LLC of Oakland, Oregon is the project’s prime contractor.

An open house was held at Fleming Middle School to address concerns about the impact on summer tourism along the Rogue River.

“The closure to rebuild the off-ramp should be the biggest inconvenience to travelers, but it was necessary to build a dual left-turn lane,” said ODOT Project Manager Ted Paselk.

“With a few exceptions, folks were appreciative of the planned work with the closure and the need for improvements to the interchange,” said Paselk. The Merlin interchange project website is www.oregon.gov/ODOT/HWY/ REGION3/Pages/I-5-Exit-61.aspx.

That five-day closure will be the project’s only full closure. For the summer, travelers can expect intermittent delays and 24-hour flagging at the Merlin/Monument Drive intersection as work focuses on the roadway and traffic signals. The project is designed to end backups on the northbound off-ramp that June extend 26, 2015 back to the I-5 travel odotmovingahead.com nearly lanes as well as provide needed safety improvements for the next 20 years of operation.