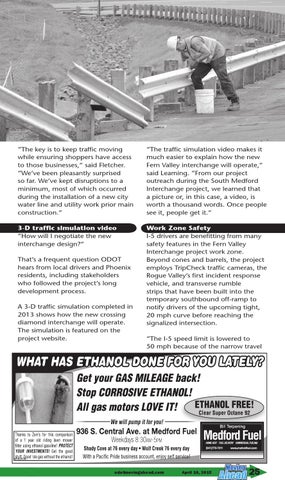 “The key is to keep traffic moving while ensuring shoppers have access to those businesses,” said Fletcher. “We’ve been pleasantly surprised so far. We’ve kept disruptions to a minimum, most of which occurred during the installation of a new city water line and utility work prior main construction.”

“The traffic simulation video makes it much easier to explain how the new Fern Valley interchange will operate,” said Leaming. “From our project outreach during the South Medford Interchange project, we learned that a picture or, in this case, a video, is worth a thousand words. Once people see it, people get it.”

3-D traffic simulation video “How will I negotiate the new interchange design?”

Work Zone Safety I-5 drivers are benefitting from many safety features in the Fern Valley Interchange project work zone. Beyond cones and barrels, the project employs TripCheck traffic cameras, the Rogue Valley’s first incident response vehicle, and transverse rumble strips that have been built into the temporary southbound off-ramp to notify drivers of the upcoming tight, 20 mph curve before reaching the signalized intersection.

That’s a frequent question ODOT hears from local drivers and Phoenix residents, including stakeholders who followed the project’s long development process. A 3-D traffic simulation completed in 2013 shows how the new crossing diamond interchange will operate. The simulation is featured on the project website.