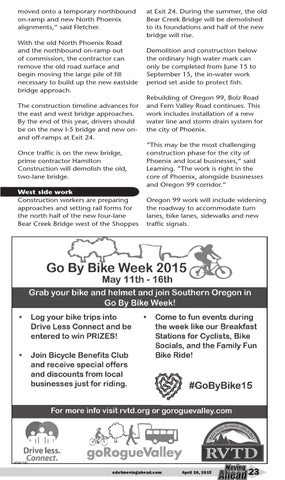 moved onto a temporary northbound on-ramp and new North Phoenix alignments,” said Fletcher. With the old North Phoenix Road and the northbound on-ramp out of commission, the contractor can remove the old road surface and begin moving the large pile of fill necessary to build up the new eastside bridge approach. The construction timeline advances for the east and west bridge approaches. By the end of this year, drivers should be on the new I-5 bridge and new onand off-ramps at Exit 24. Once traffic is on the new bridge, prime contractor Hamilton Construction will demolish the old, two-lane bridge. West side work Construction workers are preparing approaches and setting rail forms for the north half of the new four-lane Bear Creek Bridge west of the Shoppes

at Exit 24. During the summer, the old Bear Creek Bridge will be demolished to its foundations and half of the new bridge will rise. Demolition and construction below the ordinary high water mark can only be completed from June 15 to September 15, the in-water work period set aside to protect fish. Rebuilding of Oregon 99, Bolz Road and Fern Valley Road continues. This work includes installation of a new water line and storm drain system for the city of Phoenix. “This may be the most challenging construction phase for the city of Phoenix and local businesses,” said Leaming. “The work is right in the core of Phoenix, alongside businesses and Oregon 99 corridor.” Oregon 99 work will include widening the roadway to accommodate turn lanes, bike lanes, sidewalks and new traffic signals.