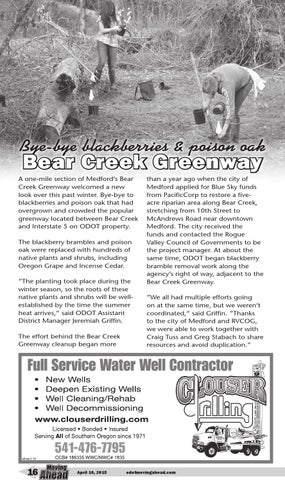 A one-mile section of Medford’s Bear Creek Greenway welcomed a new look over this past winter. Bye-bye to blackberries and poison oak that had overgrown and crowded the popular greenway located between Bear Creek and Interstate 5 on ODOT property. The blackberry brambles and poison oak were replaced with hundreds of native plants and shrubs, including Oregon Grape and Incense Cedar. “The planting took place during the winter season, so the roots of these native plants and shrubs will be wellestablished by the time the summer heat arrives,” said ODOT Assistant District Manager Jeremiah Griffin. The effort behind the Bear Creek Greenway cleanup began more

than a year ago when the city of Medford applied for Blue Sky funds from PacificCorp to restore a fiveacre riparian area along Bear Creek, stretching from 10th Street to McAndrews Road near downtown Medford. The city received the funds and contacted the Rogue Valley Council of Governments to be the project manager. At about the same time, ODOT began blackberry bramble removal work along the agency’s right of way, adjacent to the Bear Creek Greenway. “We all had multiple efforts going on at the same time, but we weren’t coordinated,” said Griffin. “Thanks to the city of Medford and RVCOG, we were able to work together with Craig Tuss and Greg Stabach to share resources and avoid duplication.”