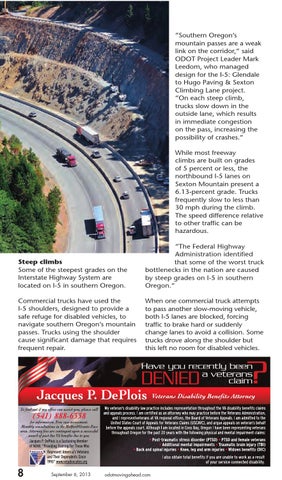 “Southern Oregon’s mountain passes are a weak link on the corridor,” said ODOT Project Leader Mark Leedom, who managed design for the I-5: Glendale to Hugo Paving & Sexton Climbing Lane project. “On each steep climb, trucks slow down in the outside lane, which results in immediate congestion on the pass, increasing the possibility of crashes.” While most freeway climbs are built on grades of 5 percent or less, the northbound I-5 lanes on Sexton Mountain present a 6.13-percent grade. Trucks frequently slow to less than 30 mph during the climb. The speed difference relative to other traffic can be hazardous.

Steep climbs Some of the steepest grades on the Interstate Highway System are located on I-5 in southern Oregon.

“The Federal Highway Administration identified that some of the worst truck bottlenecks in the nation are caused by steep grades on I-5 in southern Oregon.”

Commercial trucks have used the I-5 shoulders, designed to provide a safe refuge for disabled vehicles, to navigate southern Oregon’s mountain passes. Trucks using the shoulder cause significant damage that requires frequent repair.

When one commercial truck attempts to pass another slow-moving vehicle, both I-5 lanes are blocked, forcing traffic to brake hard or suddenly change lanes to avoid a collision. Some trucks drove along the shoulder but this left no room for disabled vehicles.