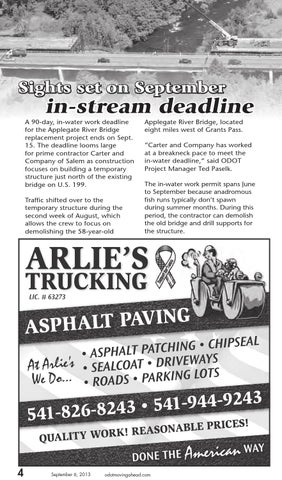 A 90-day, in-water work deadline for the Applegate River Bridge replacement project ends on Sept. 15. The deadline looms large for prime contractor Carter and Company of Salem as construction focuses on building a temporary structure just north of the existing bridge on U.S. 199. Traffic shifted over to the temporary structure during the second week of August, which allows the crew to focus on demolishing the 58-year-old

“Carter and Company has worked at a breakneck pace to meet the in-water deadline,” said ODOT Project Manager Ted Paselk. The in-water work permit spans June to September because anadromous fish runs typically don’t spawn during summer months. During this period, the contractor can demolish the old bridge and drill supports for the structure.