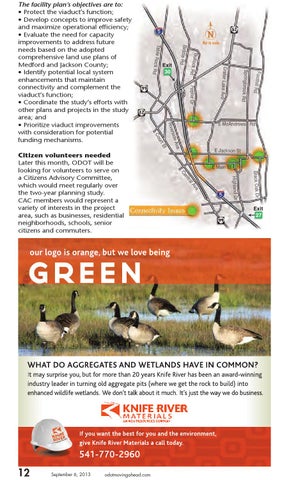 The facility plan’s objectives are to: • Protect the viaduct’s function; • Develop concepts to improve safety and maximize operational efﬁciency; • Evaluate the need for capacity improvements to address future needs based on the adopted comprehensive land use plans of Medford and Jackson County; • Identify potential local system enhancements that maintain connectivity and complement the viaduct’s function; • Coordinate the study’s efforts with other plans and projects in the study area; and • Prioritize viaduct improvements with consideration for potential funding mechanisms. Citizen volunteers needed Later this month, ODOT will be looking for volunteers to serve on a Citizens Advisory Committee, which would meet regularly over the two-year planning study. CAC members would represent a variety of interests in the project area, such as businesses, residential neighborhoods, schools, senior citizens and commuters.