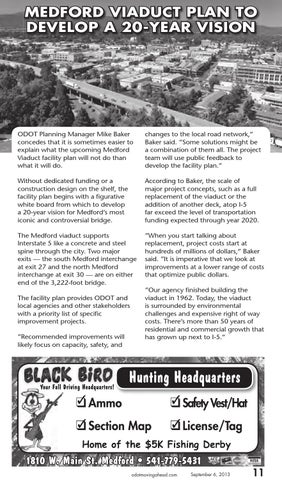 ODOT Planning Manager Mike Baker concedes that it is sometimes easier to explain what the upcoming Medford Viaduct facility plan will not do than what it will do.

changes to the local road network,” Baker said. “Some solutions might be a combination of them all. The project team will use public feedback to develop the facility plan.”

Without dedicated funding or a construction design on the shelf, the facility plan begins with a figurative white board from which to develop a 20-year vision for Medford’s most iconic and controversial bridge.

According to Baker, the scale of major project concepts, such as a full replacement of the viaduct or the addition of another deck, atop I-5 far exceed the level of transportation funding expected through year 2020.

“When you start talking about replacement, project costs start at hundreds of millions of dollars,” Baker said. “It is imperative that we look at improvements at a lower range of costs that optimize public dollars.

The facility plan provides ODOT and local agencies and other stakeholders with a priority list of specific improvement projects. “Recommended improvements will likely focus on capacity, safety, and

“Our agency finished building the viaduct in 1962. Today, the viaduct is surrounded by environmental challenges and expensive right of way costs. There’s more than 50 years of residential and commercial growth that has grown up next to I-5.”