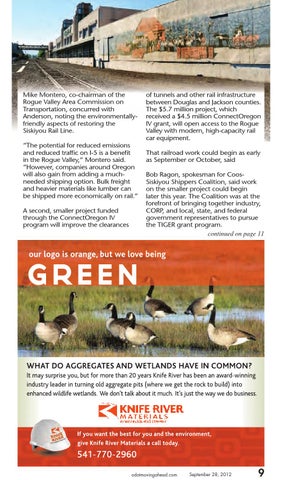 Mike Montero, co-chairman of the Rogue Valley Area Commission on Transportation, concurred with Anderson, noting the environmentallyfriendly aspects of restoring the Siskiyou Rail Line. “The potential for reduced emissions and reduced traffic on I-5 is a benefit in the Rogue Valley,” Montero said. “However, companies around Oregon will also gain from adding a muchneeded shipping option. Bulk freight and heavier materials like lumber can be shipped more economically on rail.” A second, smaller project funded through the ConnectOregon IV program will improve the clearances

of tunnels and other rail infrastructure between Douglas and Jackson counties. The $5.7 million project, which received a $4.5 million ConnectOregon IV grant, will open access to the Rogue Valley with modern, high-capacity rail car equipment. That railroad work could begin as early as September or October, said Bob Ragon, spokesman for CoosSiskiyou Shippers Coalition, said work on the smaller project could begin later this year. The Coalition was at the forefront of bringing together industry, CORP, and local, state, and federal government representatives to pursue the TIGER grant program.