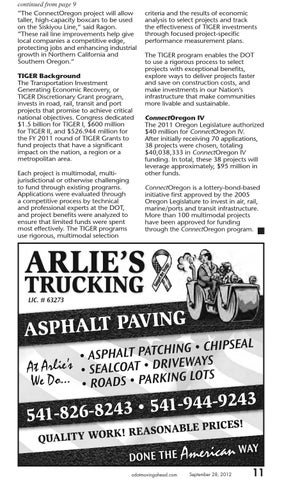 continued from page 9 “The ConnectOregon project will allow taller, high-capacity boxcars to be used on the Siskiyou Line,” said Ragon. “These rail line improvements help give local companies a competitive edge, protecting jobs and enhancing industrial growth in Northern California and Southern Oregon.” TIGER Background The Transportation Investment Generating Economic Recovery, or TIGER Discretionary Grant program, invests in road, rail, transit and port projects that promise to achieve critical national objectives. Congress dedicated $1.5 billion for TIGER I, $600 million for TIGER II, and $526.944 million for the FY 2011 round of TIGER Grants to fund projects that have a significant impact on the nation, a region or a metropolitan area. Each project is multimodal, multijurisdictional or otherwise challenging to fund through existing programs. Applications were evaluated through a competitive process by technical and professional experts at the DOT, and project benefits were analyzed to ensure that limited funds were spent most effectively. The TIGER programs use rigorous, multimodal selection

criteria and the results of economic analysis to select projects and track the effectiveness of TIGER investments through focused project-specific performance measurement plans. The TIGER program enables the DOT to use a rigorous process to select projects with exceptional benefits, explore ways to deliver projects faster and save on construction costs, and make investments in our Nation’s infrastructure that make communities more livable and sustainable. ConnectOregon IV The 2011 Oregon Legislature authorized $40 million for ConnectOregon IV. After initially receiving 70 applications, 38 projects were chosen, totaling $40,038,333 in ConnectOregon IV funding. In total, these 38 projects will leverage approximately, $95 million in other funds. ConnectOregon is a lottery-bond-based initiative first approved by the 2005 Oregon Legislature to invest in air, rail, marine/ports and transit infrastructure. More than 100 multimodal projects have been approved for funding through the ConnectOregon program.