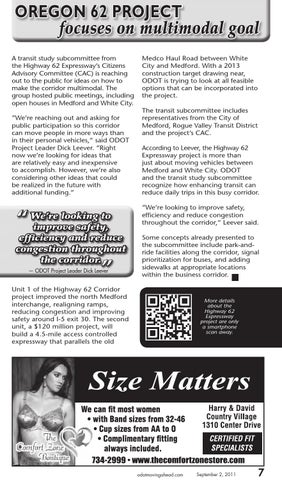 OREGON 62 PROJECT focuses on multimodal goal A transit study subcommittee from the Highway 62 Expressway’s Citizens Advisory Committee (CAC) is reaching out to the public for ideas on how to make the corridor multimodal. The group hosted public meetings, including open houses in Medford and White City. “We’re reaching out and asking for public participation so this corridor can move people in more ways than in their personal vehicles,” said ODOT Project Leader Dick Leever. “Right now we’re looking for ideas that are relatively easy and inexpensive to accomplish. However, we’re also considering other ideas that could be realized in the future with additional funding.”

We’re looking to improve safety, efficiency and reduce congestion throughout the corridor.

Medco Haul Road between White City and Medford. With a 2013 construction target drawing near, ODOT is trying to look at all feasible options that can be incorporated into the project. The transit subcommittee includes representatives from the City of Medford, Rogue Valley Transit District and the project’s CAC. According to Leever, the Highway 62 Expressway project is more than just about moving vehicles between Medford and White City. ODOT and the transit study subcommittee recognize how enhancing transit can reduce daily trips in this busy corridor. “We’re looking to improve safety, efficiency and reduce congestion throughout the corridor,” Leever said. Some concepts already presented to the subcommittee include park-andride facilities along the corridor, signal prioritization for buses, and adding sidewalks at appropriate locations within the business corridor.

Unit 1 of the Highway 62 Corridor project improved the north Medford interchange, realigning ramps, reducing congestion and improving safety around I-5 exit 30. The second unit, a $120 million project, will build a 4.5-mile access controlled expressway that parallels the old

More details about the Highway 62 Expressway project are only a smartphone scan away.