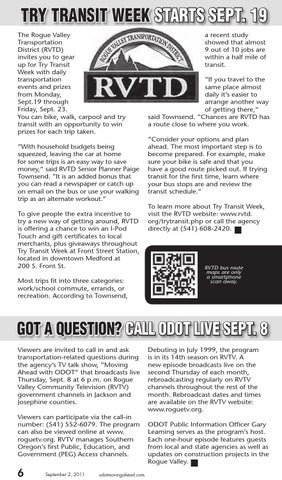 TRY TRANSIT WEEK STARTS SEPT. 19 The Rogue Valley Transportation District (RVTD) invites you to gear up for Try Transit Week with daily transportation events and prizes from Monday, Sept.19 through Friday, Sept. 23. You can bike, walk, carpool and try transit with an opportunity to win prizes for each trip taken. “With household budgets being squeezed, leaving the car at home for some trips is an easy way to save money,” said RVTD Senior Planner Paige Townsend. “It is an added bonus that you can read a newspaper or catch up on email on the bus or use your walking trip as an alternate workout.” To give people the extra incentive to try a new way of getting around, RVTD is offering a chance to win an I-Pod Touch and gift certificates to local merchants, plus giveaways throughout Try Transit Week at Front Street Station, located in downtown Medford at 200 S. Front St. Most trips fit into three categories: work/school commute, errands, or recreation. According to Townsend,

a recent study showed that almost 9 out of 10 jobs are within a half mile of transit. “If you travel to the same place almost daily it’s easier to arrange another way of getting there,” said Townsend. “Chances are RVTD has a route close to where you work. “Consider your options and plan ahead. The most important step is to become prepared. For example, make sure your bike is safe and that you have a good route picked out. If trying transit for the first time, learn where your bus stops are and review the transit schedule.” To learn more about Try Transit Week, visit the RVTD website: www.rvtd. org/trytransit.php or call the agency directly at (541) 608-2420.

RVTD bus route maps are only a smartphone scan away.

GOT A QUESTION? CALL ODOT LIVE SEPT. 8 Viewers are invited to call in and ask transportation-related questions during the agency’s TV talk show, “Moving Ahead with ODOT” that broadcasts live Thursday, Sept. 8 at 6 p.m. on Rogue Valley Community Television (RVTV) government channels in Jackson and Josephine counties. Viewers can participate via the call-in number: (541) 552-6079. The program can also be viewed online at www. roguetv.org. RVTV manages Southern Oregon’s first Public, Education, and Government (PEG) Access channels.

Debuting in July 1999, the program is in its 14th season on RVTV. A new episode broadcasts live on the second Thursday of each month, rebroadcasting regularly on RVTV channels throughout the rest of the month. Rebroadcast dates and times are available on the RVTV website: www.roguetv.org. ODOT Public Information Officer Gary Leaming serves as the program’s host. Each one-hour episode features guests from local and state agencies as well as updates on construction projects in the Rogue Valley.