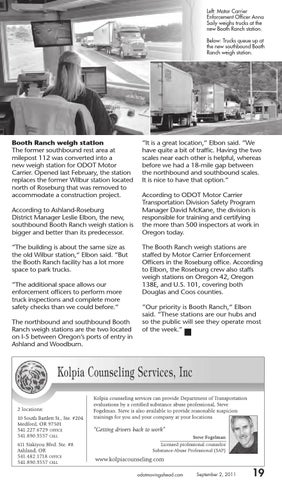 Booth Ranch weigh station The former southbound rest area at milepost 112 was converted into a new weigh station for ODOT Motor Carrier. Opened last February, the station replaces the former Wilbur station located north of Roseburg that was removed to accommodate a construction project. According to Ashland-Roseburg District Manager Leslie Elbon, the new, southbound Booth Ranch weigh station is bigger and better than its predecessor. “The building is about the same size as the old Wilbur station,” Elbon said. “But the Booth Ranch facility has a lot more space to park trucks. “The additional space allows our enforcement officers to perform more truck inspections and complete more safety checks than we could before.” The northbound and southbound Booth Ranch weigh stations are the two located on I-5 between Oregon’s ports of entry in Ashland and Woodburn.

“It is a great location,” Elbon said. “We have quite a bit of traffic. Having the two scales near each other is helpful, whereas before we had a 18-mile gap between the northbound and southbound scales. It is nice to have that option.” According to ODOT Motor Carrier Transportation Division Safety Program Manager David McKane, the division is responsible for training and certifying the more than 500 inspectors at work in Oregon today. The Booth Ranch weigh stations are staffed by Motor Carrier Enforcement Officers in the Roseburg office. According to Elbon, the Roseburg crew also staffs weigh stations on Oregon 42, Oregon 138E, and U.S. 101, covering both Douglas and Coos counties. “Our priority is Booth Ranch,” Elbon said. “These stations are our hubs and so the public will see they operate most of the week.”