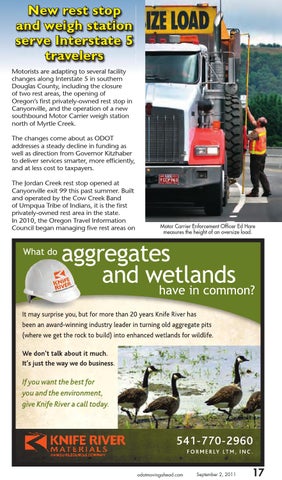 New rest stop and weigh station serve Interstate 5 travelers Motorists are adapting to several facility changes along Interstate 5 in southern Douglas County, including the closure of two rest areas, the opening of Oregonâ&amp;#x20AC;&amp;#x2122;s first privately-owned rest stop in Canyonville, and the operation of a new southbound Motor Carrier weigh station north of Myrtle Creek. The changes come about as ODOT addresses a steady decline in funding as well as direction from Governor Kitzhaber to deliver services smarter, more efficiently, and at less cost to taxpayers. The Jordan Creek rest stop opened at Canyonville exit 99 this past summer. Built and operated by the Cow Creek Band of Umpqua Tribe of Indians, it is the first privately-owned rest area in the state. In 2010, the Oregon Travel Information Council began managing five rest areas on