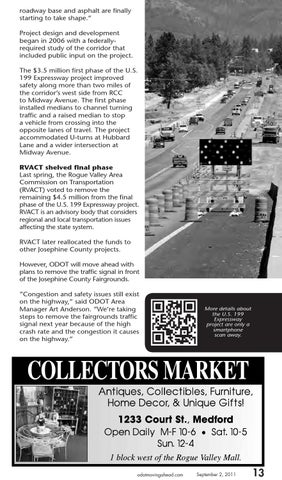 roadway base and asphalt are finally starting to take shape.” Project design and development began in 2006 with a federallyrequired study of the corridor that included public input on the project. The $3.5 million first phase of the U.S. 199 Expressway project improved safety along more than two miles of the corridor’s west side from RCC to Midway Avenue. The first phase installed medians to channel turning traffic and a raised median to stop a vehicle from crossing into the opposite lanes of travel. The project accommodated U-turns at Hubbard Lane and a wider intersection at Midway Avenue. RVACT shelved final phase Last spring, the Rogue Valley Area Commission on Transportation (RVACT) voted to remove the remaining $4.5 million from the final phase of the U.S. 199 Expressway project. RVACT is an advisory body that considers regional and local transportation issues affecting the state system. RVACT later reallocated the funds to other Josephine County projects. However, ODOT will move ahead with plans to remove the traffic signal in front of the Josephine County Fairgrounds. “Congestion and safety issues still exist on the highway,” said ODOT Area Manager Art Anderson. “We’re taking steps to remove the fairgrounds traffic signal next year because of the high crash rate and the congestion it causes on the highway.”

More details about the U.S. 199 Expressway project are only a smartphone scan away.