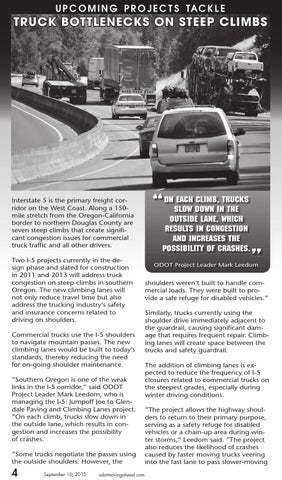 Interstate 5 is the primary freight corridor on the West Coast. Along a 150mile stretch from the Oregon-California border to northern Douglas County are seven steep climbs that create significant congestion issues for commercial truck traffic and all other drivers. Two I-5 projects currently in the design phase and slated for construction in 2011 and 2013 will address truck congestion on steep climbs in southern Oregon. The new climbing lanes will not only reduce travel time but also address the trucking industry’s safety and insurance concerns related to driving on shoulders. Commercial trucks use the I-5 shoulders to navigate mountain passes. The new climbing lanes would be built to today’s standards, thereby reducing the need for on-going shoulder maintenance. “Southern Oregon is one of the weak links in the I-5 corridor,” said ODOT Project Leader Mark Leedom, who is managing the I-5: Jumpoff Joe to Glendale Paving and Climbing Lanes project. “On each climb, trucks slow down in the outside lane, which results in congestion and increases the possibility of crashes. “Some trucks negotiate the passes using the outside shoulders. However, the

each climb, trucks “ On slow down in the

outside lane, which results in congestion and increases the possibility of crashes.

shoulders weren’t built to handle commercial loads. They were built to provide a safe refuge for disabled vehicles.” Similarly, trucks currently using the shoulder drive immediately adjacent to the guardrail, causing significant damage that requires frequent repair. Climbing lanes will create space between the trucks and safety guardrail. The addition of climbing lanes is expected to reduce the frequency of I-5 closures related to commercial trucks on the steepest grades, especially during winter driving conditions. “The project allows the highway shoulders to return to their primary purpose, serving as a safety refuge for disabled vehicles or a chain-up area during winter storms,” Leedom said. “The project also reduces the likelihood of crashes caused by faster moving trucks veering into the fast lane to pass slower-moving