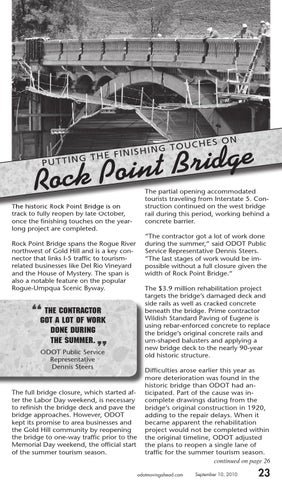 The historic Rock Point Bridge is on track to fully reopen by late October, once the finishing touches on the yearlong project are completed. Rock Point Bridge spans the Rogue River northwest of Gold Hill and is a key connector that links I-5 traffic to tourismrelated businesses like Del Rio Vineyard and the House of Mystery. The span is also a notable feature on the popular Rogue-Umpqua Scenic Byway.

“gotTheacontractor lot of work done during the summer.

The full bridge closure, which started after the Labor Day weekend, is necessary to refinish the bridge deck and pave the bridge approaches. However, ODOT kept its promise to area businesses and the Gold Hill community by reopening the bridge to one-way traffic prior to the Memorial Day weekend, the official start of the summer tourism season.

The partial opening accommodated tourists traveling from Interstate 5. Construction continued on the west bridge rail during this period, working behind a concrete barrier. “The contractor got a lot of work done during the summer,” said ODOT Public Service Representative Dennis Steers. “The last stages of work would be impossible without a full closure given the width of Rock Point Bridge.” The $3.9 million rehabilitation project targets the bridge’s damaged deck and side rails as well as cracked concrete beneath the bridge. Prime contractor Wildish Standard Paving of Eugene is using rebar-enforced concrete to replace the bridge’s original concrete rails and urn-shaped balusters and applying a new bridge deck to the nearly 90-year old historic structure. Difficulties arose earlier this year as more deterioration was found in the historic bridge than ODOT had anticipated. Part of the cause was incomplete drawings dating from the bridge’s original construction in 1920, adding to the repair delays. When it became apparent the rehabilitation project would not be completed within the original timeline, ODOT adjusted the plans to reopen a single lane of traffic for the summer tourism season.