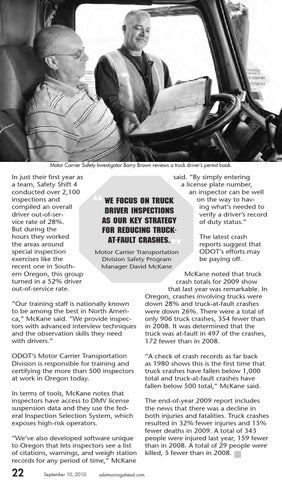 said. “By simply entering a license plate number, an inspector can be well on the way to havWe focus on truck ing what’s needed to driver inspections verify a driver’s record as our key strategy of duty status.”

“Our training staff is nationally known to be among the best in North America,” McKane said. “We provide inspectors with advanced interview techniques and the observation skills they need with drivers.” ODOT’s Motor Carrier Transportation Division is responsible for training and certifying the more than 500 inspectors at work in Oregon today. In terms of tools, McKane notes that inspectors have access to DMV license suspension data and they use the federal Inspection Selection System, which exposes high-risk operators. “We’ve also developed software unique to Oregon that lets inspectors see a list of citations, warnings, and weigh station records for any period of time,” McKane

The latest crash reports suggest that ODOT’s efforts may be paying off.

McKane noted that truck crash totals for 2009 show that last year was remarkable. In Oregon, crashes involving trucks were down 28% and truck-at-fault crashes were down 26%. There were a total of only 906 truck crashes, 354 fewer than in 2008. It was determined that the truck was at-fault in 497 of the crashes, 172 fewer than in 2008. “A check of crash records as far back as 1980 shows this is the first time that truck crashes have fallen below 1,000 total and truck-at-fault crashes have fallen below 500 total,” McKane said. The end-of-year 2009 report includes the news that there was a decline in both injuries and fatalities. Truck crashes resulted in 32% fewer injuries and 15% fewer deaths in 2009. A total of 343 people were injured last year, 159 fewer than in 2008. A total of 29 people were killed, 5 fewer than in 2008.