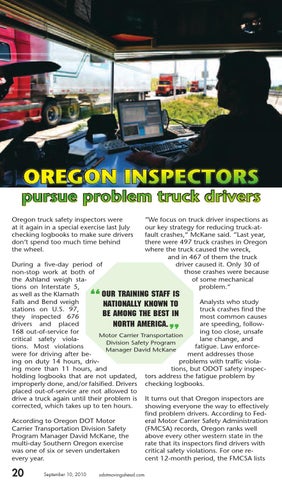 pursue problem truck drivers Oregon truck safety inspectors were at it again in a special exercise last July checking logbooks to make sure drivers don’t spend too much time behind the wheel.

“We focus on truck driver inspections as our key strategy for reducing truck-atfault crashes,” McKane said. “Last year, there were 497 truck crashes in Oregon where the truck caused the wreck, and in 467 of them the truck driver caused it. Only 30 of those crashes were because of some mechanical problem.”

During a five-day period of non-stop work at both of the Ashland weigh stations on Interstate 5, as well as the Klamath Our training staff is Falls and Bend weigh Analysts who study nationally known to stations on U.S. 97, truck crashes find the be among the best in they inspected 676 most common causes drivers and placed are speeding, followNorth America. 168 out-of-service for ing too close, unsafe Motor Carrier Transportation critical safety violalane change, and Division Safety Program tions. Most violations fatigue. Law enforceManager David McKane were for driving after bement addresses those ing on duty 14 hours, drivproblems with traffic violaing more than 11 hours, and tions, but ODOT safety inspecholding logbooks that are not updated, tors address the fatigue problem by improperly done, and/or falsified. Drivers checking logbooks. placed out-of-service are not allowed to drive a truck again until their problem is It turns out that Oregon inspectors are corrected, which takes up to ten hours. showing everyone the way to effectively find problem drivers. According to FedAccording to Oregon DOT Motor eral Motor Carrier Safety Administration Carrier Transportation Division Safety (FMCSA) records, Oregon ranks well Program Manager David McKane, the above every other western state in the multi-day Southern Oregon exercise rate that its inspectors find drivers with was one of six or seven undertaken critical safety violations. For one reevery year. cent 12-month period, the FMCSA lists