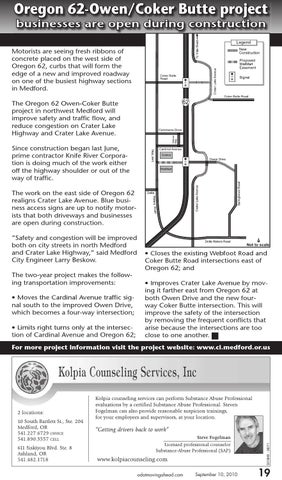 Motorists are seeing fresh ribbons of concrete placed on the west side of Oregon 62, curbs that will form the edge of a new and improved roadway on one of the busiest highway sections in Medford. The Oregon 62 Owen-Coker Butte project in northwest Medford will improve safety and traffic flow, and reduce congestion on Crater Lake Highway and Crater Lake Avenue. Since construction began last June, prime contractor Knife River Corporation is doing much of the work either off the highway shoulder or out of the way of traffic. The work on the east side of Oregon 62 realigns Crater Lake Avenue. Blue business access signs are up to notify motorists that both driveways and businesses are open during construction. “Safety and congestion will be improved both on city streets in north Medford and Crater Lake Highway,” said Medford City Engineer Larry Beskow. The two-year project makes the following transportation improvements: • Moves the Cardinal Avenue trafﬁc signal south to the improved Owen Drive, which becomes a four-way intersection; • Limits right turns only at the intersection of Cardinal Avenue and Oregon 62;