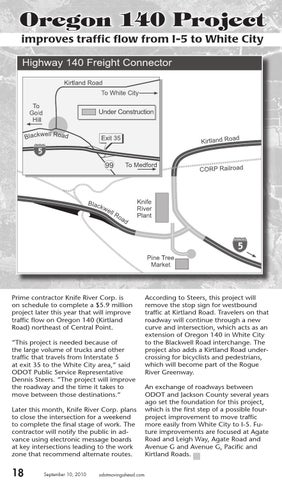 Prime contractor Knife River Corp. is on schedule to complete a $5.9 million project later this year that will improve traffic flow on Oregon 140 (Kirtland Road) northeast of Central Point. “This project is needed because of the large volume of trucks and other traffic that travels from Interstate 5 at exit 35 to the White City area,” said ODOT Public Service Representative Dennis Steers. “The project will improve the roadway and the time it takes to move between those destinations.” Later this month, Knife River Corp. plans to close the intersection for a weekend to complete the final stage of work. The contractor will notify the public in advance using electronic message boards at key intersections leading to the work zone that recommend alternate routes.

According to Steers, this project will remove the stop sign for westbound traffic at Kirtland Road. Travelers on that roadway will continue through a new curve and intersection, which acts as an extension of Oregon 140 in White City to the Blackwell Road interchange. The project also adds a Kirtland Road undercrossing for bicyclists and pedestrians, which will become part of the Rogue River Greenway. An exchange of roadways between ODOT and Jackson County several years ago set the foundation for this project, which is the first step of a possible fourproject improvement to move traffic more easily from White City to I-5. Future improvements are focused at Agate Road and Leigh Way, Agate Road and Avenue G and Avenue G, Pacific and Kirtland Roads.