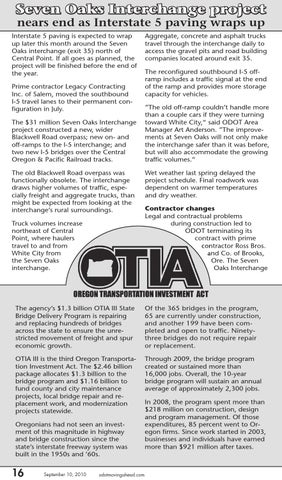 Interstate 5 paving is expected to wrap up later this month around the Seven Oaks interchange (exit 35) north of Central Point. If all goes as planned, the project will be finished before the end of the year. Prime contractor Legacy Contracting Inc. of Salem, moved the southbound I-5 travel lanes to their permanent configuration in July. The $31 million Seven Oaks Interchange project constructed a new, wider Blackwell Road overpass; new on- and off-ramps to the I-5 interchange; and two new I-5 bridges over the Central Oregon &amp; Pacific Railroad tracks. The old Blackwell Road overpass was functionally obsolete. The interchange draws higher volumes of traffic, especially freight and aggregate trucks, than might be expected from looking at the interchange’s rural surroundings. Truck volumes increase northeast of Central Point, where haulers travel to and from White City from the Seven Oaks interchange.

Aggregate, concrete and asphalt trucks travel through the interchange daily to access the gravel pits and road building companies located around exit 35. The reconfigured southbound I-5 offramp includes a traffic signal at the end of the ramp and provides more storage capacity for vehicles. “The old off-ramp couldn’t handle more than a couple cars if they were turning toward White City,” said ODOT Area Manager Art Anderson. “The improvements at Seven Oaks will not only make the interchange safer than it was before, but will also accommodate the growing traffic volumes.” Wet weather last spring delayed the project schedule. Final roadwork was dependent on warmer temperatures and dry weather. Contractor changes Legal and contractual problems during construction led to ODOT terminating its contract with prime contractor Ross Bros. and Co. of Brooks, Ore. The Seven Oaks Interchange

The agency’s $1.3 billion OTIA III State Bridge Delivery Program is repairing and replacing hundreds of bridges across the state to ensure the unrestricted movement of freight and spur economic growth.

Of the 365 bridges in the program, 65 are currently under construction, and another 199 have been completed and open to traffic. Ninetythree bridges do not require repair or replacement.

Through 2009, the bridge program created or sustained more than 16,000 jobs. Overall, the 10-year bridge program will sustain an annual average of approximately 2,300 jobs.

Oregonians had not seen an investment of this magnitude in highway and bridge construction since the state’s interstate freeway system was built in the 1950s and ’60s.

In 2008, the program spent more than $218 million on construction, design and program management. Of those expenditures, 85 percent went to Oregon firms. Since work started in 2003, businesses and individuals have earned more than $921 million after taxes.