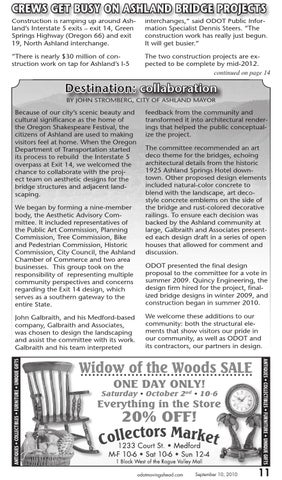 The two construction projects are expected to be complete by mid-2012.

Because of our city’s scenic beauty and cultural significance as the home of the Oregon Shakespeare Festival, the citizens of Ashland are used to making visitors feel at home. When the Oregon Department of Transportation started its process to rebuild the Interstate 5 overpass at Exit 14, we welcomed the chance to collaborate with the project team on aesthetic designs for the bridge structures and adjacent landscaping. We began by forming a nine-member body, the Aesthetic Advisory Committee. It included representatives of the Public Art Commission, Planning Commission, Tree Commission, Bike and Pedestrian Commission, Historic Commission, City Council, the Ashland Chamber of Commerce and two area businesses. This group took on the responsibility of representing multiple community perspectives and concerns regarding the Exit 14 design, which serves as a southern gateway to the entire State. John Galbraith, and his Medford-based company, Galbraith and Associates, was chosen to design the landscaping and assist the committee with its work. Galbraith and his team interpreted

feedback from the community and transformed it into architectural renderings that helped the public conceptualize the project. The committee recommended an art deco theme for the bridges, echoing architectural details from the historic 1925 Ashland Springs Hotel downtown. Other proposed design elements included natural-color concrete to blend with the landscape, art decostyle concrete emblems on the side of the bridge and rust-colored decorative railings. To ensure each decision was backed by the Ashland community at large, Galbraith and Associates presented each design draft in a series of open houses that allowed for comment and discussion. ODOT presented the final design proposal to the committee for a vote in summer 2009. Quincy Engineering, the design firm hired for the project, finalized bridge designs in winter 2009, and construction began in summer 2010. We welcome these additions to our community: both the structural elements that show visitors our pride in our community, as well as ODOT and its contractors, our partners in design.