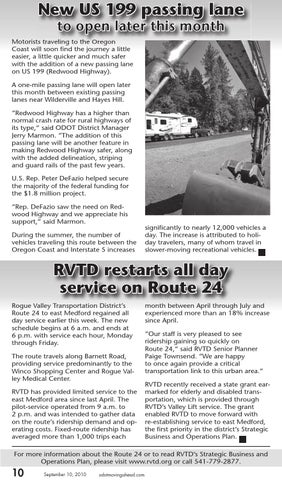 New US 199 passing lane to open later this month

Motorists traveling to the Oregon Coast will soon find the journey a little easier, a little quicker and much safer with the addition of a new passing lane on US 199 (Redwood Highway). A one-mile passing lane will open later this month between existing passing lanes near Wilderville and Hayes Hill. “Redwood Highway has a higher than normal crash rate for rural highways of its type,” said ODOT District Manager Jerry Marmon. “The addition of this passing lane will be another feature in making Redwood Highway safer, along with the added delineation, striping and guard rails of the past few years. U.S. Rep. Peter DeFazio helped secure the majority of the federal funding for the $1.8 million project. “Rep. DeFazio saw the need on Redwood Highway and we appreciate his support,” said Marmon. During the summer, the number of vehicles traveling this route between the Oregon Coast and Interstate 5 increases

significantly to nearly 12,000 vehicles a day. The increase is attributed to holiday travelers, many of whom travel in slower-moving recreational vehicles.

RVTD restarts all day service on Route 24 Rogue Valley Transportation District’s Route 24 to east Medford regained all day service earlier this week. The new schedule begins at 6 a.m. and ends at 6 p.m. with service each hour, Monday through Friday. The route travels along Barnett Road, providing service predominantly to the Winco Shopping Center and Rogue Valley Medical Center. RVTD has provided limited service to the east Medford area since last April. The pilot-service operated from 9 a.m. to 2 p.m. and was intended to gather data on the route’s ridership demand and operating costs. Fixed-route ridership has averaged more than 1,000 trips each

month between April through July and experienced more than an 18% increase since April. “Our staff is very pleased to see ridership gaining so quickly on Route 24,” said RVTD Senior Planner Paige Townsend. “We are happy to once again provide a critical transportation link to this urban area.” RVTD recently received a state grant earmarked for elderly and disabled transportation, which is provided through RVTD’s Valley Lift service. The grant enabled RVTD to move forward with re-establishing service to east Medford, the first priority in the district’s Strategic Business and Operations Plan.

For more information about the Route 24 or to read RVTD’s Strategic Business and Operations Plan, please visit www.rvtd.org or call 541-779-2877.