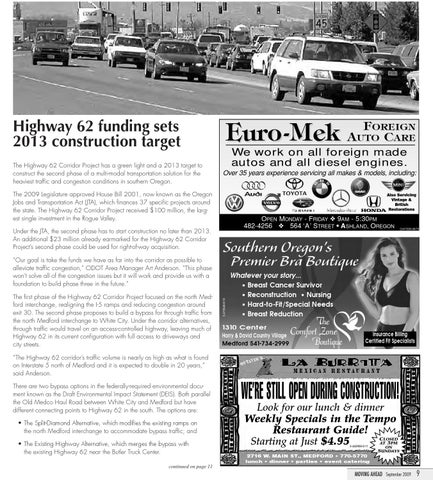 Highway 62 funding sets 2013 construction target The Highway 62 Corridor Project has a green light and a 2013 target to construct the second phase of a multi-modal transportation solution for the heaviest traffic and congestion conditions in southern Oregon.

We work on all foreign made autos and all diesel engines.

Over 35 years experience servicing all makes &amp; models, including:

The 2009 Legislature approved House Bill 2001, now known as the Oregon Jobs and Transportation Act (JTA), which finances 37 specific projects around the state. The Highway 62 Corridor Project received $100 million, the largest single investment in the Rogue Valley.

“Our goal is take the funds we have as far into the corridor as possible to alleviate traffic congestion,” ODOT Area Manager Art Anderson. “This phase won’t solve all of the congestion issues but it will work and provide us with a foundation to build phase three in the future.” The first phase of the Highway 62 Corridor Project focused on the north Medford interchange, realigning the I-5 ramps and reducing congestion around exit 30. The second phase proposes to build a bypass for through traffic from the north Medford interchange to White City. Under the corridor alternatives, through traffic would travel on an access-controlled highway, leaving much of Highway 62 in its current configuration with full access to driveways and city streets. “The Highway 62 corridor’s traffic volume is nearly as high as what is found on Interstate 5 north of Medford and it is expected to double in 20 years,” said Anderson. There are two bypass options in the federally-required environmental document known as the Draft Environmental Impact Statement (DEIS). Both parallel the Old Medco Haul Road between White City and Medford but have different connecting points to Highway 62 in the south. The options are: • The Split-Diamond Alternative, which modifies the existing ramps on the north Medford interchange to accommodate bypass traffic; and • The Existing Highway Alternative, which merges the bypass with the existing Highway 62 near the Butler Truck Center. continued on page 11

Under the JTA, the second phase has to start construction no later than 2013. An additional $23 million already earmarked for the Highway 62 Corridor Project’s second phase could be used for right-of-way acquisition.

LOSED AT PM ON SUNDAYS