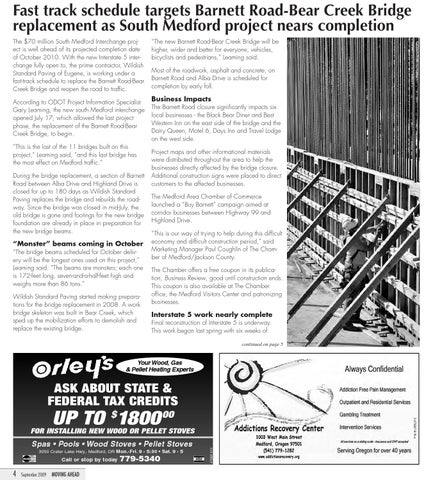 Fast track schedule targets Barnett Road-Bear Creek Bridge replacement as South Medford project nears completion The $70 million South Medford Interchange project is well ahead of its projected completion date of October 2010. With the new Interstate 5 interchange fully open to, the prime contractor, Wildish Standard Paving of Eugene, is working under a fast-track schedule to replace the Barnett Road-Bear Creek Bridge and reopen the road to traffic. According to ODOT Project Information Specialist Gary Leaming, the new south Medford interchange opened July 17, which allowed the last project phase, the replacement of the Barnett Road-Bear Creek Bridge, to begin. “This is the last of the 11 bridges built on this project,” Leaming said, “and this last bridge has the most effect on Medford traffic.” During the bridge replacement, a section of Barnett Road between Alba Drive and Highland Drive is closed for up to 180 days as Wildish Standard Paving replaces the bridge and rebuilds the roadway. Since the bridge was closed in mid-July, the old bridge is gone and footings for the new bridge foundation are already in place in preparation for the new bridge beams.

“Monster” beams coming in October “The bridge beams scheduled for October delivery will be the longest ones used on this project,” Leaming said. “The beams are monsters; each one is 172-feet long, seven-and-a-half-feet high and weighs more than 86 tons.” Wildish Standard Paving started making preparations for the bridge replacement in 2008. A work bridge skeleton was built in Bear Creek, which sped up the mobilization efforts to demolish and replace the existing bridge.

“The new Barnett Road-Bear Creek Bridge will be higher, wider and better for everyone, vehicles, bicyclists and pedestrians,” Leaming said. Most of the roadwork, asphalt and concrete, on Barnett Road and Alba Drive is scheduled for completion by early fall.

Business Impacts The Barnett Road closure significantly impacts six local businesses - the Black Bear Diner and Best Western Inn on the east side of the bridge and the Dairy Queen, Motel 6, Days Inn and Travel Lodge on the west side. Project maps and other informational materials were distributed throughout the area to help the businesses directly affected by the bridge closure. Additional construction signs were placed to direct customers to the affected businesses. The Medford Area Chamber of Commerce launched a “Buy Barnett” campaign aimed at corridor businesses between Highway 99 and Highland Drive. “This is our way of trying to help during this difficult economy and difficult construction period,” said Marketing Manager Paul Coughlin of The Chamber of Medford/Jackson County. The Chamber offers a free coupon in its publication, Business Review, good until construction ends. This coupon is also available at The Chamber office, the Medford Visitors Center and patronizing businesses.