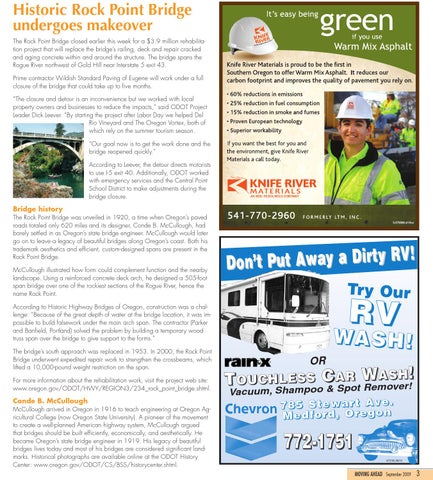 Historic Rock Point Bridge undergoes makeover The Rock Point Bridge closed earlier this week for a $3.9 million rehabilitation project that will replace the bridge’s railing, deck and repair cracked and aging concrete within and around the structure. The bridge spans the Rogue River northwest of Gold Hill near Interstate 5 exit 43. Prime contractor Wildish Standard Paving of Eugene will work under a full closure of the bridge that could take up to five months. “The closure and detour is an inconvenience but we worked with local property owners and businesses to reduce the impacts,” said ODOT Project Leader Dick Leever. “By starting the project after Labor Day we helped Del Rio Vineyard and The Oregon Vortex, both of which rely on the summer tourism season. “Our goal now is to get the work done and the bridge reopened quickly.” According to Leever, the detour directs motorists to use I-5 exit 40. Additionally, ODOT worked with emergency services and the Central Point School District to make adjustments during the bridge closure.

Bridge history The Rock Point Bridge was unveiled in 1920, a time when Oregon’s paved roads totaled only 620 miles and its designer, Conde B. McCullough, had barely settled in as Oregon’s state bridge engineer. McCullough would later go on to leave a legacy of beautiful bridges along Oregon’s coast. Both his trademark aesthetics and efficient, custom-designed spans are present in the Rock Point Bridge. McCullough illustrated how form could complement function and the nearby landscape. Using a reinforced concrete deck arch, he designed a 505-foot span bridge over one of the rockiest sections of the Rogue River, hence the name Rock Point.

According to Historic Highway Bridges of Oregon, construction was a challenge: “Because of the great depth of water at the bridge location, it was impossible to build falsework under the main arch span. The contractor (Parker and Banfield, Portland) solved the problem by building a temporary wood truss span over the bridge to give support to the forms.” The bridge’s south approach was replaced in 1953. In 2000, the Rock Point Bridge underwent expedited repair work to strengthen the crossbeams, which lifted a 10,000-pound weight restriction on the span. For more information about the rehabilitation work, visit the project web site: www.oregon.gov/ODOT/HWY/REGION3/234_rock_point_bridge.shtml.

Conde B. McCullough McCullough arrived in Oregon in 1916 to teach engineering at Oregon Agricultural College (now Oregon State University). A pioneer of the movement to create a well-planned American highway system, McCullough argued that bridges should be built efficiently, economically, and aesthetically. He became Oregon’s state bridge engineer in 1919. His legacy of beautiful bridges lives today and most of his bridges are considered significant landmarks. Historical photographs are available online at the ODOT History Center: www.oregon.gov/ODOT/CS/BSS/historycenter.shtml.