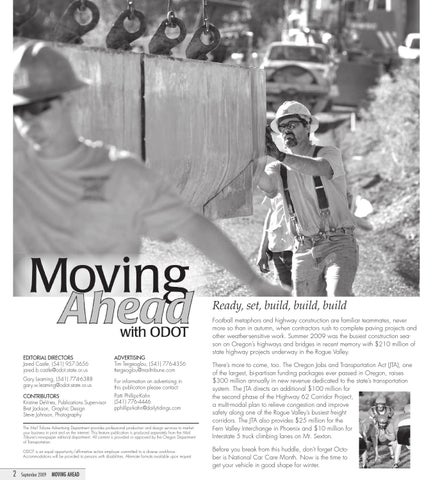 For information on advertising in this publication please contact:

The Mail Tribune Advertising Department provides professional production and design services to market your business in print and on the internet. This feature publication is produced separately from the Mail Tribune’s newspaper editorial department. All content is provided or approved by the Oregon Department of Transportation. ODOT is an equal opportunity/affirmative action employer committed to a diverse workforce. Accommodations will be provided to persons with disabilities. Alternate formats available upon request.

Football metaphors and highway construction are familiar teammates, never more so than in autumn, when contractors rush to complete paving projects and other weather-sensitive work. Summer 2009 was the busiest construction season on Oregon’s highways and bridges in recent memory with $210 million of state highway projects underway in the Rogue Valley. There’s more to come, too. The Oregon Jobs and Transportation Act (JTA), one of the largest, bi-partisan funding packages ever passed in Oregon, raises $300 million annually in new revenue dedicated to the state’s transportation system. The JTA directs an additional $100 million for the second phase of the Highway 62 Corridor Project, a multi-modal plan to relieve congestion and improve safety along one of the Rogue Valley’s busiest freight corridors. The JTA also provides $25 million for the Fern Valley Interchange in Phoenix and $10 million for Interstate 5 truck climbing lanes on Mt. Sexton. Before you break from this huddle, don’t forget October is National Car Care Month. Now is the time to get your vehicle in good shape for winter.