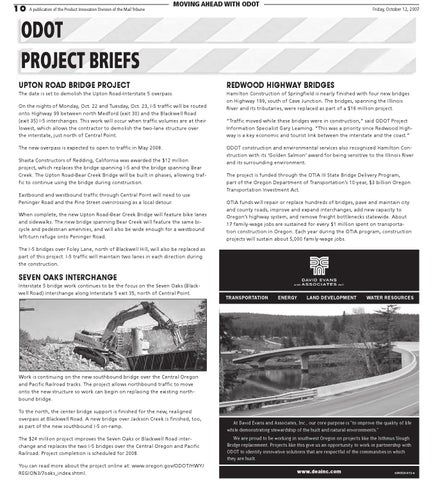 The date is set to demolish the Upton Road-Interstate 5 overpass.

Hamilton Construction of Springﬁeld is nearly ﬁnished with four new bridges on Highway 199, south of Cave Junction. The bridges, spanning the Illinois River and its tributaries, were replaced as part of a $16 million project.

On the nights of Monday, Oct. 22 and Tuesday, Oct. 23, I-5 trafﬁc will be routed onto Highway 99 between north Medford (exit 30) and the Blackwell Road (exit 35) I-5 interchanges. This work will occur when trafﬁc volumes are at their lowest, which allows the contractor to demolish the two-lane structure over the interstate, just north of Central Point. The new overpass is expected to open to trafﬁc in May 2008. Shasta Constructors of Redding, California was awarded the $12 million project, which replaces the bridge spanning I-5 and the bridge spanning Bear Creek. The Upton Road-Bear Creek Bridge will be built in phases, allowing trafﬁc to continue using the bridge during construction. Eastbound and westbound trafﬁc through Central Point will need to use Peninger Road and the Pine Street overcrossing as a local detour. When complete, the new Upton Road-Bear Creek Bridge will feature bike lanes and sidewalks. The new bridge spanning Bear Creek will feature the same bicycle and pedestrian amenities, and will also be wide enough for a westbound left-turn refuge onto Peninger Road.

“Trafﬁc moved while these bridges were in construction,” said ODOT Project Information Specialist Gary Leaming. “This was a priority since Redwood Highway is a key economic and tourist link between the interstate and the coast.” ODOT construction and environmental services also recognized Hamilton Construction with its ‘Golden Salmon’ award for being sensitive to the Illinois River and its surrounding environment. The project is funded through the OTIA III State Bridge Delivery Program, part of the Oregon Department of Transportation’s 10-year, $3 billion Oregon Transportation Investment Act. OTIA funds will repair or replace hundreds of bridges, pave and maintain city and county roads, improve and expand interchanges, add new capacity to Oregon’s highway system, and remove freight bottlenecks statewide. About 17 family-wage jobs are sustained for every $1 million spent on transportation construction in Oregon. Each year during the OTIA program, construction projects will sustain about 5,000 family-wage jobs.

The I-5 bridges over Foley Lane, north of Blackwell Hill, will also be replaced as part of this project. I-5 trafﬁc will maintain two lanes in each direction during the construction.

Work is continuing on the new southbound bridge over the Central Oregon and Paciﬁc Railroad tracks. The project allows northbound trafﬁc to move onto the new structure so work can begin on replacing the existing northbound bridge. To the north, the center bridge support is ﬁnished for the new, realigned overpass at Blackwell Road. A new bridge over Jackson Creek is ﬁnished, too, as part of the new southbound I-5 on-ramp. The $24 million project improves the Seven Oaks or Blackwell Road interchange and replaces the two I-5 bridges over the Central Oregon and Paciﬁc Railroad. Project completion is scheduled for 2008. You can read more about the project online at: www.oregon.gov/ODOT/HWY/ REGION3/7oaks_index.shtml.

At David Evans and Associates, Inc., our core purpose is “to improve the quality of life while demonstrating stewardship of the built and natural environments.” We are proud to be working in southwest Oregon on projects like the Isthmus Slough Bridge replacement. Projects like this give us an opportunity to work in partnership with ODOT to identify innovative solutions that are respectful of the communities in which they are built. www.deainc.com