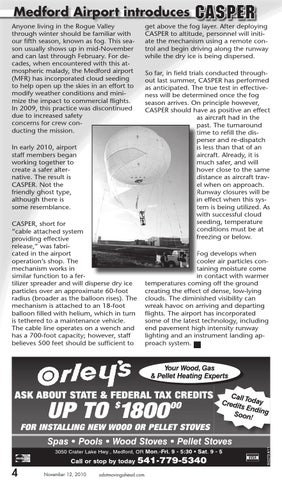 Medford Airport introduces Anyone living in the Rogue Valley through winter should be familiar with our fifth season, known as fog. This season usually shows up in mid-November and can last through February. For decades, when encountered with this atmospheric malady, the Medford airport (MFR) has incorporated cloud seeding to help open up the skies in an effort to modify weather conditions and minimize the impact to commercial flights. In 2009, this practice was discontinued due to increased safety concerns for crew conducting the mission. In early 2010, airport staff members began working together to create a safer alternative. The result is CASPER. Not the friendly ghost type, although there is some resemblance. CASPER, short for “cable attached system providing effective release,” was fabricated in the airport operation’s shop. The mechanism works in similar function to a fertilizer spreader and will disperse dry ice particles over an approximate 60-foot radius (broader as the balloon rises). The mechanism is attached to an 18-foot balloon filled with helium, which in turn is tethered to a maintenance vehicle. The cable line operates on a wench and has a 700-foot capacity; however, staff believes 500 feet should be sufficient to

get above the fog layer. After deploying CASPER to altitude, personnel will initiate the mechanism using a remote control and begin driving along the runway while the dry ice is being dispersed. So far, in field trials conducted throughout last summer, CASPER has performed as anticipated. The true test in effectiveness will be determined once the fog season arrives. On principle however, CASPER should have as positive an effect as aircraft had in the past. The turnaround time to refill the disperser and re-dispatch is less than that of an aircraft. Already, it is much safer, and will hover close to the same distance as aircraft travel when on approach. Runway closures will be in effect when this system is being utilized. As with successful cloud seeding, temperature conditions must be at freezing or below. Fog develops when cooler air particles containing moisture come in contact with warmer temperatures coming off the ground creating the effect of dense, low-lying clouds. The diminished visibility can wreak havoc on arriving and departing flights. The airport has incorporated some of the latest technology, including end pavement high intensity runway lighting and an instrument landing approach system.