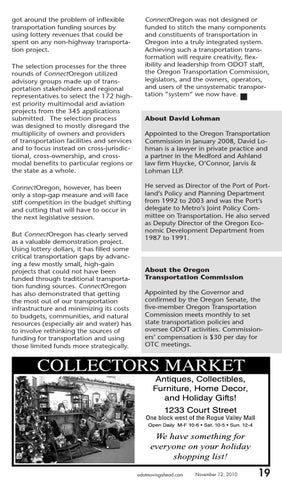 got around the problem of inflexible transportation funding sources by using lottery revenues that could be spent on any non-highway transportation project. The selection processes for the three rounds of ConnectOregon utilized advisory groups made up of transportation stakeholders and regional representatives to select the 172 highest priority multimodal and aviation projects from the 345 applications submitted. The selection process was designed to mostly disregard the multiplicity of owners and providers of transportation facilities and services and to focus instead on cross-jurisdictional, cross-ownership, and crossmodal benefits to particular regions or the state as a whole. ConnectOregon, however, has been only a stop-gap measure and will face stiff competition in the budget shifting and cutting that will have to occur in the next legislative session. But ConnectOregon has clearly served as a valuable demonstration project. Using lottery dollars, it has filled some critical transportation gaps by advancing a few mostly small, high-gain projects that could not have been funded through traditional transportation funding sources. ConnectOregon has also demonstrated that getting the most out of our transportation infrastructure and minimizing its costs to budgets, communities, and natural resources (especially air and water) has to involve rethinking the sources of funding for transportation and using those limited funds more strategically.

ConnectOregon was not designed or funded to stitch the many components and constituents of transportation in Oregon into a truly integrated system. Achieving such a transportation transformation will require creativity, flexibility and leadership from ODOT staff, the Oregon Transportation Commission, legislators, and the owners, operators, and users of the unsystematic transportation “system” we now have.

About David Lohman Appointed to the Oregon Transportation Commission in January 2008, David Lohman is a lawyer in private practice and a partner in the Medford and Ashland law firm Huycke, O’Connor, Jarvis &amp; Lohman LLP. He served as Director of the Port of Portland’s Policy and Planning Department from 1992 to 2003 and was the Port’s delegate to Metro’s Joint Policy Committee on Transportation. He also served as Deputy Director of the Oregon Economic Development Department from 1987 to 1991.